An ultra-secure form of coded communication could be given a boost, thanks to scientists from the Universities of Glasgow, Strathclyde and Rochester (USA).

In a paper published in the journal Science, quantum physicists have demonstrated the randomness of quantum mechanics also applies to the measurement of a particle’s angle and rotation.

The discovery creates new opportunities for increasing bandwidth in quantum cryptography – an ultra-secure way of communicating secretly which can intrinsically detect third-party interception. 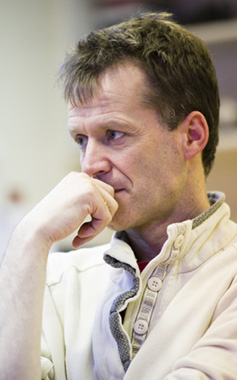 Quantum cryptography relies on the strange rules of quantum mechanics, as exhibited by ‘entangled particles’ where the condition of one is instantaneously reflected in the other even if they are separated by a great distance – a phenomenon called ‘nonlocality’. Thus, by measuring one particle, you can know the condition of the other.

Entanglement can occur, for example, when a light particle – called a photon – is split into two separate but related photons which shoot off in opposite directions. The apparent instantaneous communication between the two violates Einstein’s law of relativity which says that nothing can travel faster than the speed of light.

Einstein called this ‘spooky action at a distance’ and thought that this showed quantum mechanics theory was incomplete. He believed some yet-to-be-discovered local ‘hidden variables’ accounted for this seemingly paradoxical behaviour, but nonlocality has been shown to exist.

The outcome of a measurement on either particle seems random, but the measurements of both always agree with each other and it is this agreement that can be used to transmit a secret message – making quantum cryptography the only guaranteed form of secure communication.

Einstein did not like this randomness and famously said, ‘God does not play dice with nature’.

However, modern physics disagrees and now the research by the Glasgow scientists and their colleagues shows that the randomness of quantum mechanics also applies to the angles.

Professor Miles Padgett, Professor of Physics at the University of Glasgow, pictured above, said: “God does play dice. It has been difficult to show this is the case with angle because angles are problematic: no-one can agree on how to measure them. If I say an angle is 10 degrees, you might say its 350 degrees. It depends on your starting point.

“The fact that an angle can take many different values means that each particle of light, a photon, can be encoded to carry the whole alphabet, potentially increasing the data rate of quantum cryptography – the only guaranteed form of secure communication.

“It is guaranteed because you can detect when someone is attempting to read the message because the very act of an unauthorised measurement of an entangled photon destroys the message.”

The research, entitled ‘Quantum Correlations in optical angle-orbital angular momentum variables’ was funded by the Engineering and Physical Sciences Research Council and is published in the latest edition of Science.