Scientists at the University of Glasgow, in collaboration with colleagues from Edinburgh, Manchester, Southampton and York universities, have developed technology which will help microchip designers create future integrated circuits.

As part of a £5.3m Engineering and Physical Sciences Research Council (EPSRC) eScience pilot project called NanoCMOS they have developed simulation tools which take advantage of grid computing to predict how billions of nano-transistors, each with their own unique and unpredictable atomic-scale variations, will perform within a circuit.

The simulations will help tackle the problem of ‘statistical variability’ within transistors which is a major obstacle in the continued scaling of Complementary Metal-oxide Semiconductor (CMOS) microchips in future nano-scale technology generations.

Professor Asen Asenov, who is the principal investigator of NanoCMOS and leads the device modelling team at Glasgow which developed the simulation tools, said: “Nano-scale transistors are at the heart of our computers, mobile phones, cars, TV sets and games consoles chips. They play a crucial role in the UK vision for the digital economy of the future. 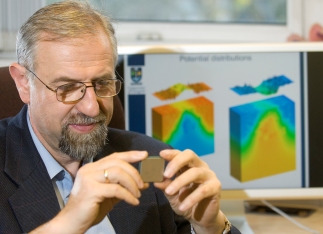 “Since their invention in 1947, they have been getting smaller and smaller so that today we can place billions of transistors onto one small sliver of silicon.”

Transistors today have gate lengths of 40 nanometres; by comparison a human hair is around 100,000 nanometres wide. However, the smaller they become, the more atomic-scale imperfections and variations within each transistor become a problem.

Statistical variations between transistors mainly occur due to the random number and position of discrete dopants – chemical spices introduced in the silicon of which the microchips are made to form the structure of the individual transistors.

This statistical variability means that circuits built from billions of transistors with individually-unique properties may not perform as well as expected, despite being manufactured in an identical way.

Prof Asenov said: “If we are to continue to shrink the size of transistors in order to develop ever more powerful circuits, we need fundamentally new approaches to circuit and system design that can take account of the statistical variability.

“Up until now, Moore’s Law, the prediction made in 1965 by Intel co-founder Gordon Moore that transistor dimensions will scale continuously and the number of transistors that could be placed on a microchip would double every two years, has been the driving force of the chip manufacturing and design industry, but the days of ‘happy scaling’ are over.”

However, Prof Asen Asenov and his team have applied grid computing technology to tackle the problem, in collaboration with leading design houses, chip manufacturers and software vendors.

Using grid computing technology, simulations of huge numbers of microscopically different nano-transistos have been carried out on thousands of microprocessors on networked computer clusters consuming more than 20 years’ of CPU time in a week. As a result the team are able to accurately predict for the first time, using three-dimensional numerical simulations, how billions of microscopically different transistors will perform in future computer chips.

Results of the simulation of unprecedented numbers of transistors will be presented at the International Electron Devices Meeting in Baltimore in December. Complementary results were also published in the October edition of leading electronics device journal ‘IEEE Transaction on Electron Devices’.

“This will be a great benefit, not only to the major semiconductor manufacturers around the world, but also to the vibrant UK chip design industry that is facing the increasing challenges of the modern nano-CMOS technology and design.”

The NanoCMS grid computing technology was developed by the National e-Science Centre at the Universities of Glasgow and Edinburgh and the e-science North West Centre at Manchester University.

You can read more about NanoCMOS and Professor Asen Asenov’s research in an article in Horizons, the biannual magazine from the University of Glasgow, showcasing innovation and excellence across the University.

Engineering and Physical Sciences Research Council (EPSRC) EPSRC is the main UK government agency for funding research and training in engineering and the physical sciences, investing more than £850 million a year in a broad range of subjects - from mathematics to materials science, and from information technology to structural engineering. www.epsrc.ac.uk