The 250th anniversary of the birth of poet Robert Burns is to be celebrated when a major conference examining his life and work opens on Thursday 15 January at the University of Glasgow.

'Robert Burns 1759 to 2009' is the largest conference of its kind with more than 60 acclaimed academics from around the world gathering for three days of lectures and events.

The conference is the first major event of the Year of Homecoming and it is the first of at least four major European conferences celebrating the work of Scotland’s favourite poet.

Organised by the Centre for Robert Burns Studies, it will discuss the latest academic developments concerning study of the Bard and will also see the unveiling of a previously unseen sketch believed to be the poet by his contemporary John Kay. The etching drawn by Kay (1742-1826), is currently held by the Royal Scottish Academy in Edinburgh and while it remains known as the ‘Portrait of an unknown Man’, Burns’ experts are convinced it is the Bard. 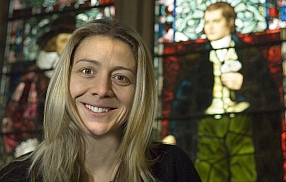 Delegates will also be among the first to see a rare collection of Burns’ work known as the Kilmarnock Edition. When published in 1786 there were only 612 copies printed and experts understand there are few copies still in existence. This copy of the Kilmarnock Edition, described by Burns’ scholars as the “holy grail of Burns’ books”, has been left to the Centre for Robert Burns Studies by a fellow University of Glasgow academic.

Dr Gerry Carruthers said: “This Burns event is a world first in terms of size and significance. There will be no bigger Burns event this year in terms of academic excellence and expertise. All the delegates gathered both recognise and understand the worth of Burns as a major literary figure and as a cultural phenomenon.

“Our Burns Studies conference fulfils one of the aspirations of 'Homecoming' 2009. It will bring together academics and interested parties from a number of countries including the US, Canada, Spain, Germany and Ireland for three very full days of scholarship, discussion and entertainment. It is also appropriate we host it given that the University of Glasgow has the contract for the forthcoming multi-volume Oxford University Press edition of Burns. This publishing project will draw on the expertise of a number of Scottish universities and many from overseas.”

Fiona Hyslop, Cabinet Secretary for Education and Lifelong Learning, who is to attend the conference's opening tomorrow, said:

"I am delighted to help begin this year of celebration by launching the Robert Burns Conference. Robert Burns is truly an international cultural icon, as reflected by the high interest in this conference from scholars and Burns enthusiasts from around the world.

"This is Scotland's year of homecoming, a celebration of Scottish success stories to mark the 250th anniversary of our national poet Robert Burns. From Burns Night through to St Andrews Day over 300 inspirational events are taking place across the country as we encourage Scots at home and abroad to take pride in their country.

The programme features seven plenary papers delivered by distinguished academics over the next three days:

In addition to the academic lectures and discussions, a number of evening events will take place and all are open to the public.

On Thursday, the Oran Mor in the city’s west end hosts an evening of Burns music and song with singer Sheena Wellington performing 'The Merry Muses' followed by a performance of 'The Jolly Beggars'.

Friday evening sees the world premiere of James MacMillan’s stunning composition based on Burns’ “Lament of Mary Queen of Scots”. Having been commissioned especially for the conference, The Lament, will be performed by the Haydn Trio Eisenstadt and singers Lorna Anderson and Jamie MacDougall in the University’s Bute Hall. An additional set of Burns songs with arrangements by Haydn will also be performed that night.

The conference will be brought to a close with an alternative Burns Supper on Saturday evening where actor Karen Dunbar will recite Tam O' Shanter. Tickets are still on sale priced £60.

Before the Burns Supper, school pupils who took part in drawing and writing competitions focusing on the Bard’s wit and insight, will be presented with prizes. The competition run by the Centre and Itchy Cool Education, the award winning promoters and publishers in Scots, saw hundreds of entries from youngsters aged four-years-old up to 18. The acclaimed Scottish writer Liz Lochhead and designer and children’s publisher Andrew Wolffe chose the winners along with Janice Forsyth.

Frances Hendron, conference co-ordinator, said: “The colour, the fun, the cleverness and inherent Scottish cultural identity rooted in his work is interpreted wonderfully by each of the winning entries.

“This competition will give academics from all over the world an insight into the attraction children and young people have for Robert Burns’ work. Burns’ poetry is a powerful introduction to indigenous Scottish culture.”

For tickets to the Alternative Burns Supper please contact Emily Wallace at the University of Glasgow Development and Alumni Office on telephone 330 3210 or e.wallace@admin.gla.ac.uk

The Centre for Robert Burns Studies was established in July 2007. The purpose of the Centre will be the development of research, scholarship and teaching in Robert Burns, his cultural period and related literature:

- to support the development and co-ordination of existing research and teaching resources related to Robert Burns;
- to establish and sustain a centre of excellence in postgraduate studies;
- to encourage Robert Burns Studies through publications, seminar series, colloquia, conferences and other meetings;
- to foster links with other institutions in the area of Robert Burns Studies;
- to broaden interest in Robert Burns Studies by inviting visiting lecturers and by encouraging academic and student exchanges.