Archaeologists from the Universities of Glasgow and Aberdeen have found proof that pre-historic people laid flowers at the graves of their dead.

Experts believe the discovery of a bunch of meadowsweet blossoms in a Bronze Age grave in Forteviot, Perthshire is the first recorded example of such a ceremony.

Dr Kenneth Brophy, of the Department of Archaeology at the University of Glasgow, said: “The flowers are just three or four millimetres across but they are the first proof that people in the Bronze Age were actually placing flowers in with burials." 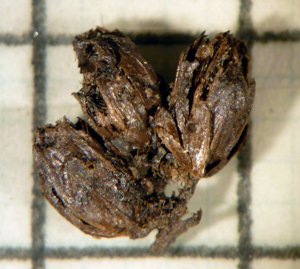 It is thought the flowers were placed by the head of a high-status individual buried within the grave as a bronze dagger with a gold hilt was also found in the same grave.

Dr Brophy added: “In burials we are used to finding metalwork, but to find these very human touches is something very rare, if not unique. It brings it home to you that what you’re looking at is not just a series of abstract remains, but actually these are people that you’re dealing with.”

The grave site had been marked by an avenue of oak posts and earthworks.

More excavations are planned at the site which is part of the Strathearn Environs and Royal Forteviot Project (Serf), including efforts to ascertain whether a sandstone slab found near the grave was part of a stone circle.

Forteviot was the seat of power of the early Scottish kings and was where Kenneth mac Alpin, one of the first kings of a united Scotland, died in 858.

As one of the major early royal centres of this time period, Forteviot plays a crucial role in assessing the complex processes that gave birth to an early medieval nation. In addition, the fields around the village preserve one of the most extensive prehistoric ceremonial landscapes in Britain.

For further information contact Stuart Forsyth in the Media Relations Office of the University of Glasgow on 0141 330 4831 or s.forsyth@admin.gla.ac.uk