Archaeologists have discovered a spectacular Early Bronze Age grave at the Scottish Royal centre at Forteviot.

In dramatic scenes near the Perthshire village last week, a giant crane was brought in to lift a massive stone covering a 4000 year old burial chamber. As the stone was lifted, there were cries of astonishment from the watching archaeologists as an intact burial chamber was revealed.

Archaeologists from Glasgow and Aberdeen Universities made this exceptional discovery during the 2009 summer season of the Strathearn Environs & Royal Forteviot (SERF) project.*

A massive sandstone slab weighing 4 tons had been found in 2008, but the team had to wait a year for the stone to be lifted, and the outcome was beyond their expectation. 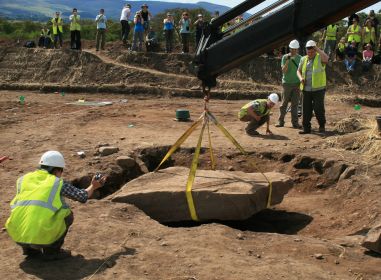 The huge capstone sealed the grave so well that organic materials survived intact as well as various metal objects that were buried with an important Bronze Age individual. Dr Kenneth Brophy, SERF co-director, said: ‘The high quality of preservation is virtually unique in Britain and is of exceptional importance for understanding the important centuries when metals were first introduced into Scotland.’

Although few remains of a body were discovered, it was clear that the deceased had been laid on a bed of quartz pebbles in sand in a large stone coffin. Amongst the grave goods was a bronze dagger with a gold band, possibly still in its leather sheath, a discovery of national significance. Beside this lay a leather bag or container, strange wooden objects and other plant matter which may represent floral tributes. Remarkably, large portions of the birch bark coffin survived as well.

This material has been taken to Edinburgh for conservation and examination in laboratory conditions by AOC Archaeology Group.  Dr Gordon Noble, SERF co-director said: ‘Until the grave goods are fully analysed it will be difficult to say a great deal about the person buried here, but it is clear that this was a person of tremendous importance to the local community.’

There was a further surprise later in the evening when the setting sun rays revealed an enigmatic series of carvings on the underside of the huge capstone. These pecked markings may represent an axe and are unique in Britain. Further axes may also have been pecked into the side slab of the stone cist beside where the head would have lain. This rock-art suggests again that this is the grave of a significant person. 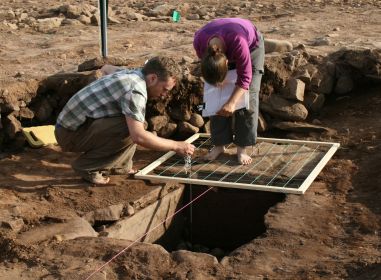 This burial was placed within an extensive complex of prehistoric ritual monuments at Forteviot which go back to the Neolithic period (perhaps as early as 3000BC) and remained a centre of religious and political significance for many millennia. Most notably, the last Pictish kings, including Kenneth Mac Alpine, who died in AD 858, were drawn to Forteviot and left a legacy of exceptional Pictish sculpture.

Professor Stephen Driscoll, SERF co-director said: ‘This excavation is part of a long-term project to study the link between the emerging kingdom of medieval Scotland and its ancient prehistoric remains. This burial provides the strongest evidence of the presence of ancestral graves which may have been regarded as mythological heros by the Picts who were also buried nearby in Forteviot.’

An open day at the dig will be held this Sunday afternoon (16 August), when visitors are welcome to take guided tours of the various sites and view some of the discoveries. Visitors can also view the Dupplin cross, housed in nearby Dunning old church, which provides one of best indication of the power and artistic accomplishments of the Picts.

The project receives funding support from Historic Scotland, Perth & Kinross Heritage Trust and operates with the cooperation of the Dupplin Estates and Strathallan School.

The Strathearn Environs & Royal Forteviot (SERF) project is a long-term study of a remarkable landscape at the heart of Scotland in Strathearn. SERF seeks to explore the early prehistoric origins of the Pictish royal centre at Forteviot and document the area’s subsequent evolution. Forteviot occupies a special place in the history of Scotland, being located at the geographical and historical heart of Scotland.

The death of King Kenneth mac Alpin, one of the first kings of a united Scotland, was recorded at the ‘palace’ of Forteviot in AD 858 and at this time it is clear that this site was the most important royal centre in a fledgling Scottish nation. Forteviot is also the location of the largest and most extensive concentration of prehistoric ritual monuments in mainland Scotland. It is these two widely separated but physically linked episodes of landscape use at Forteviot that has drawn the founders of SERF to explore what it is about Forteviot and the wider Strathearn region that created this regional centre in such different social and political situations