Vet wins award for contribution to animal health in Africa

Dr Sarah Cleaveland, a veterinary epidemiologist based jointly at the Faculty of Biomedical and Life Sciences and the Faculty of Veterinary Medicine, has won the prestigious Trevor Blackburn Award.

As a result of her work on zoonotic, livestock and wildlife diseases in East Africa, Dr Cleaveland has made an outstanding contribution to both animal and human health in Africa, resulting in widespread and tangible benefits for domestic animal health, wildlife conservation, animal welfare, and public health throughout the region and beyond. 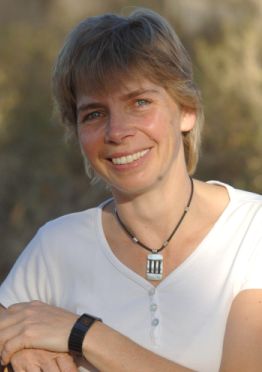 Over the past 15 years, Dr Cleaveland’s research work has been centred in northern Tanzania, focusing on the epidemiology of infectious disease at the human-wildlife-domestic animal interface, including rabies, canine distemper, bovine tuberculosis, brucellosis and echinococcosis.

As a result of the mass dog vaccination campaigns that she directed and implemented (which now involve vaccination of 200,000 dogs annually), Dr Cleaveland’s work has not only prevented hundreds of human and animal rabies deaths in the Serengeti (with at least 50 human lives saved each year),
but also protected endangered wildlife species, such as the African wild dog, from immediate disease threats. The approach that she pioneered for rabies has been extended to other canine diseases threatening wildlife, such as canine distemper, and has now been adopted in many other countries, including Ethiopia, for protection of the highly endangered Ethiopian wolf. Dr Cleaveland’s work on rabies has had profound implications beyond Africa.

Spearheading the establishment of the Alliance for Rabies Control www.rabiescontrol.net in 2006, this organisation has provided, for the first time, a focus for international advocacy for global canine rabies elimination, and within a year has resulted in the declaration by the OIE of a World Rabies Day, an initiative endorsed by the CDC, WHO, BVA, WSAVA, AVMA and numerous other national veterinary bodies - as well as recent recognition by the Gates Foundation of rabies as a priority disease for control and elimination.

Dr Cleaveland’s work at the interface of veterinary medicine, conservation biology and human health provides evidence of the scope of her vision, and the broad range of impacts that can be achieved by veterinarians. She put considerable efforts into developing projects that support pastoral communities and livelihoods, and has a very strong personal commitment to highlighting the needs of marginalised communities in the control of animal diseases. Her efforts have contributed substantially to generating awareness about the impact of diseases in these communities and developing effective approaches to control of diseases, such as bovine tuberculosis, brucellosis and malignant catarrhal fever. It is also largely as a result of her work over the past 15 years that disease management has now been recognised as a critical component of the management of the Serengeti National Park and this now serves as a model for other parks systems worldwide.

Dr Cleaveland is committed to developing an overseas field programme that contributes to a sustainable research base, particularly the training of African scientists, and their longer-term career developments in Africa. Through her projects in Tanzania and Kenya, she has also provided opportunities for many British, European and North American veterinary students to gain valuable work experience in developing country settings.

Contributing in an advisory capacity to many important initiatives, particularly in the rabies field, and advising on WHO rabies expert consultations and task forces, Dr Cleaveland has also developed a range of educational materials for prevention and control of rabies and other zoonotic diseases that have been used disseminated widely throughout Tanzania.

Dr Cleaveland has worked at the Royal (Dick) School of Veterinary Studies in the University of Edinburgh for the last 10 years, moving to Glasgow University last month.