Ten years after a newly-elected Labour Government declared that it would deliver a ‘new deal for transport’, transport experts from the Universities of Glasgow and Plymouth have exposed in a hard-hitting new book the scale of ministers’ failure in meeting their own objectives. 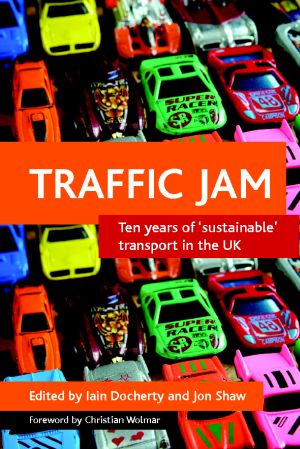 Timed to coincide with the 10th anniversary of Labour’s White Paper A New Deal for Transport, which was supposed to herald the dawn of a new approach to transport in the UK, the book features many of the UK’s most respected transport policy commentators who each give a detailed analysis of a particular area of Labour’s transport policies over the last decade.

The book provides a comprehensive overview – the only one of its kind – of how the Government has tried, and failed, to reform the transport network over the last decade.

The main criticisms of the Government’s record on transport are:

• Traffic congestion is worse than a decade ago
• The investment needs of the railways – particularly to increase capacity – have been almost completely ignored
• Bus services throughout most of the UK have remained poor, especially in comparison with our major European competitors
• Tram schemes have been abandoned, despite being proven highly effective at attracting motorists out of their cars
• Walking and cycling have been largely neglected
• The government is afraid of addressing the environmental impact of aviation
• Transport’s carbon emissions continue to rise
• Labour has been good at talking about transport improvements but far less adept at actually delivering any

The book highlights the following priorities for future transport policy:

• Giving motorists more choice – if the UK’s transport system were anywhere near as good as Germany’s or Switzerland’s, it would be easier to persuade them out of their cars
• More use of policy ‘sticks’ – such as road user charging – where necessary, but only after more choice has become available
• Providing this choice means better targeting of transport expenditure: more investment in buses, trams and railways, and less in roads and airports
• The ‘smarter choices’ approach, which promotes alternatives to car use, has been very successful in pilot and should be mainstreamed

Dr Docherty said: “high quality transport is essential to support the economy and to deliver better quality of life for all. Traffic Jam analyses why UK Government transport policy continues to fail. We hope it will make people stop and think about the state of our transport systems, and what could and should be done to improve them.

Prof Shaw said: “It is 10 years since the landmark White Paper ‘A New Deal For Transport’ which said that, for a long time we have been pursuing the wrong kinds of transport policies and that we should start to make them more sustainable - to use cars less, to walk more and to use the train more.
“The White Paper was a significant policy statement from New Labour and John Prescott famously said at the time ‘I will have failed in five years time if there are not more journeys made by public transport and fewer by car’.

“Our detailed analysis of Labour’s transport policies shows that they have been a big disappointment – at best a missed opportunity. It’s a shame because the Government came in with the right intentions but have done very little to promote meaningful change”.
The book singles out London as a rare success because of the decisions that have been taken by the devolved Greater London Authority, such as hugely increased investment in bus routes and the congestion charge. There have also been positive developments in the other devolved administrations, such as the large-scale railway investment in Scotland.

But Westminster’s policy has failed, with politicians there unwilling to take the bold decisions that are needed in order to tackle things like climate change and congestion.

And Dr Docherty believes that we should consider measures like the French versement transport, a tax which is taken direct from employees’ salaries to pay for improvements to fund public transport in their local area, and gives them subsidised or free travel on public transport in return.

“We don’t care enough about transport in the UK,” said Dr Docherty. “In France, Scandinavia and other European countries, there is much more of a policy emphasis on transport, but here it occasionally becomes a key issue when petrol gets expensive and the government doesn’t reduce fuel duty. But generally, transport is low on the list of priorities.”

The book’s foreword has been written by Christian Wolmar, a well-respected transport journalist and author, with endorsements from Glenn Lyons,
Professor of Transport and Society at the University of the West of England, and Jim Steer, Director of transport consultants Steer Davies Gleave.
Traffic Jam will be launched in London on 31 October with a seminar delivered by one of the book’s contributors, Professor Phil Goodwin, at the University of Plymouth the previous evening.

Traffic Jam: 10 Years of “Sustainable” Transport in the UK is being published by The Policy Press, based at the University of Bristol.

The Policy Press (www.policypress.org.uk) is a leading social science publisher based at the University of Bristol and is committed to publishing books that make a difference.