Palestinian refugees in unofficial camps are living in slum conditions redolent of UK housing in the last century, a study from the University of Glasgow has found.

The research team surveyed 437 residents in 97 households in the Gaza Displacement Centre in Beirut, Lebanon in May 2003.

The residents were quizzed about the number of rooms they lived in, access to outside air, the presence of mould and damp, as well as their age, education, and whether they had any long term conditions. 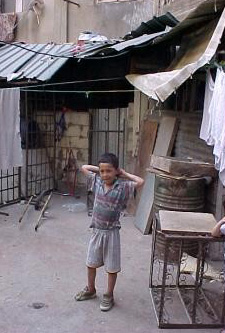 Half of the households surveyed comprised one room only, and 40 per cent had more three or more people living in each room.

Around one in 10 households had no access to external ventilation, and just under half had no heating, relying instead on blankets and clothing.

Over half the households complained of damp and mould. And a similar proportion had been forced to construct their own pipe networks in order to access running water.

One in three households had no access to piped water supplies.

Almost one in three residents were under the age of 15 and a similar proportion had a long term condition.

Children under the age of 15 were more than three times as likely to live in overcrowded conditions. 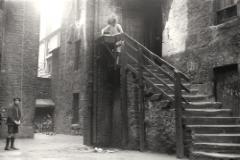 Educational attainment was generally low. One in four people was taking drugs for a long term condition.

Palestinian refugees have been displaced for almost 60 years, living in the West Bank, Gaza Strip, and the neighbouring countries of Lebanon, Syria, Jordan, and Egypt.

The United Nations (UN) set up a relief agency dedicated to Palestinian refugees in 1949.

But the numbers have now reached almost 400,000, almost half of whom live in unofficial camps or displacement centres not overseen by the UN and reliant on non-governmental organisations.

The research, published in the Journal of Epidemiology and Community Health, was conducted by a Jumana Zabaneh, a Master of Public Health student in May 2003. It was overssen by Dr Kate O'Donnell from the University's General Practice and Primary care Division.

She said: “This study demonstrates for the first time, the very poor living conditions that Palestinian refugees in unofficial camps are living under… similar to those of the slum housing in the United Kingdom in the last century.

"This study also demonstrates that with the right support and knowledge it is possible to collect evidence in a rigorous and robust manner, leading to opportunities to inform future policy and planning within the Gaza buildings."

For more information or to speak to Dr Kate O'Donnell, please contact Ray McHugh in the University's Media Relations Office on 0141 330 3535 or email r.mchugh@admin.glasgow.ac.uk

Her MPH was funded by the Karim Rida Said Foundation in London and additional support was provided by World Vision Lebanon.  The administrative and management boards of a local, Beirut-based NGO, Popular Aid for Relief and Development (PARD) were instrumental in assisting with access and support in the camp itself.