Unseen photographs of the QE2 revealed

To mark the 40th anniversary of the launch of the QE2, the University of Glasgow is unveiling unseen photographs of the construction of the world-famous ocean liner.

More than 70 photographs make up an online gallery showing every stage of the four-year process.

Images include the cutting of the steel plates to form the hull, painting of the ship, the vessel’s sea trials and even shots of the on-board hair salon.

The images can be found at www.gla.ac.uk/qe2. 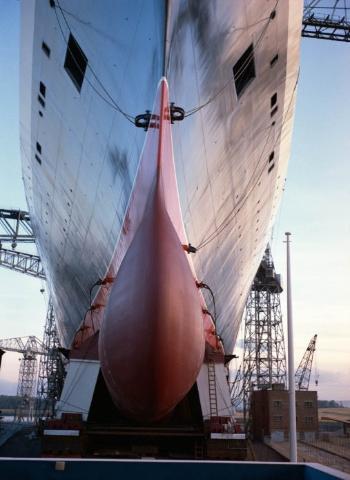 Along with the National Archives of Scotland, the University has compiled the online exhibition to commemorate the launch, and imminent retirement, of the last great Clyde-built liner.

Lesley Richmond, Director of Glasgow University Archive Services, said: “This month will be the last time that the QE2 will be seen on the banks of the river where it was built and we wanted to mark the occasion in a fitting way.  The ship was constructed by the most skilled workforce in Britain and this exhibition is a tribute to all those who were involved with her.

“The QE2 is synonymous with luxury travel and looking at the bright interior photographs it is impossible to believe that you are not looking at the rooms in a first class hotel. The workmanship and design was world class and something in which the people of Scotland should be immensely proud.”

John Brown & Co Ltd, the Clydebank based shipbuilders, won the contract in 1964 to build the latest flagship in the fleet of Cunard cruise liners, a replacement for the world famous Queen Mary and Queen Elizabeth.

The keel of John Brown ship number 736 was laid on 5 July 1965 and launched by Her Majesty, Queen Elizabeth II on September 20, 1967.  Since then,  more that two million passengers have sailed on her. 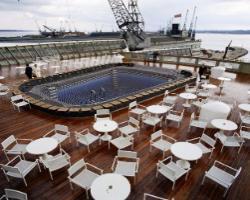 Lesley added: “The saving of the records of John Brown and the other Clyde ship yards that formed that group was an epic archival rescue. They were in grave danger of being lost forever.  Fortunately, the Upper Clyde Shipbuilders’ records were viewed by the liquidator as an asset and they were valued and advertised for sale.

"The records were secured for the Scottish Nation by the Keeper of the Records of Scotland in conjunction the City of Glasgow, Clydebank Town Council and Dumbarton County Council.  They were acquired by the National Archives of Scotland in 1973 on the understanding they would remain permanently in the west of Scotland.  The records of John Browns were given to the University of Glasgow where they have been preserved and maintained ever since." 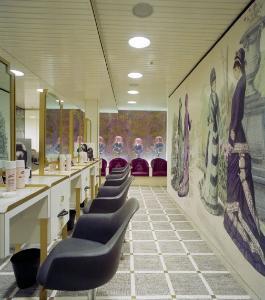 George Mackenzie, Keeper of the Records of Scotland, said: “The only part of the John Brown material that did not stay in the west was the fragile photographic negatives.

“The thousands of images on glass plate negatives are very easily damaged and so to keep them safe for future generations we only allow trained staff to handle them in our special store in Edinburgh.

"Only a small selection of the photographic images of the QE2 have been digitised but the views of the building and launching of the most famous ship in the world and the vivid colours of the original 1960s decoration of the ship can now be seen by anyone, anywhere in the world."

For more information, please contact Ray McHugh in the University of Glasgow Media Relations Office on 0141 330 3535 or email r.mchugh@admin.gla.ac.uk

Glasgow University Archives Services holds the historical records of the University, created and accumulated since its foundation in 1451 as well as one of the biggest collections of records of business in Europe, providing a unique and invaluable resource for information on Scotland’s enterprise and industrial heritage. In total, Glasgow University Archive Services holds over 1000 collections, spanning more than seven centuries. The archives are an excellent source of information for the University’s own history and for the history of Glasgow, the West of Scotland and indeed the world. Researchers who wish to make use of them for academic research, student assignments, personal interest, family and local history or professional projects are welcome.

The National Archives of Scotland is based in Edinburgh and exists to select, preserve, and make available the national archives of Scotland in whatever medium, to the highest standards; to promote the growth and maintenance of proper archive provision throughout the country; and to lead the development of archival practice in Scotland.   The National Archives of Scotland also holds historical records created by businesses, landed estates, families, churches and other corporate bodies. Every year tens of thousands of people from all over the world use this service to carry out research, seek advice on record keeping, and enhance the learning and teaching of history.