University Principal Sir Muir Russell has paid tribute to the genius of Lord Kelvin at a wreath-laying ceremony in Westminster Abbey.

Speaking on 17 December 2007, the centenary of Lord Kelvin's death, the Principal said:

"Today we remember and honour, the life and achievements of William Thomson, Lord Kelvin, who died this day,  1907. 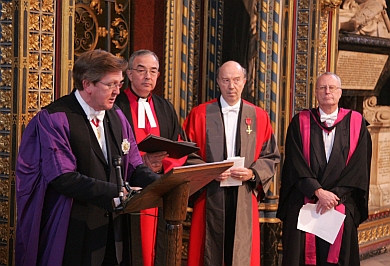 "We acknowledge anew, the contribution he made to the field of human knowledge and to its practical application.  The scale and scope of Lord Kelvin’s achievements and their lasting legacy bear full testament to an outstanding scientist, ingenious inventor, and successful business man.  Author of 661 scientific papers, and 75 patents, he pioneered the field of Thermodynamics, the science and development of refrigeration and of electric light.  He set down the foundations for modern communication through the successful laying of the  transatlantic telegraph cable.  His maxim ‘To measure is to know’ drove him to refine the accuracy of electrical units of measurement, to develop the compass for use in iron ships, and calculating engines for the prediction of the tides and made him the first to apply mathematics to the question of the ages of the earth and sun. 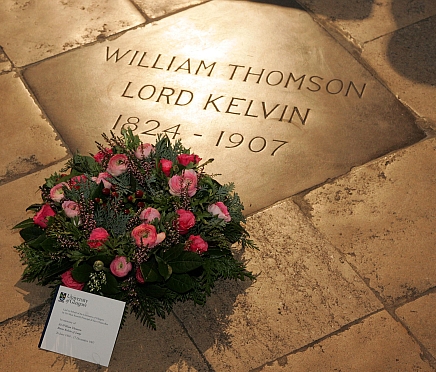 "We give thanks, that through these and all his many other achievements, Lord Kelvin brought distinction to this country and to the fields of science and engineering.

"We would also pay tribute to Lord Kelvin’s long and distinguished service to the University of Glasgow, and for the ways in which he enhanced and continues to enhance our fame and reputation.  He was a student, an inspirational teacher, indefatigable researcher, and Professor of Natural Philosophy for 53 years, becoming our Chancellor in 1904.  His commitment to Glasgow was immense: we owe him a great debt of gratitude.  Through this act of remembrance and celebration, we mark once more our appreciation for all that he did for, and continues to mean to, our University.

"In recognising the contribution Lord Kelvin made to human knowledge, the distinction he thereby brought to our country, the sciences and to our University, let us also pay tribute to and celebrate the spirit of the man.  He once said: ‘When you are face to face with a difficulty, you are up against a discovery.’

"Few words better capture the driving force of Lord Kelvin.    As a man of boundless curiosity, intellectual energy, and a zest to understand the laws that govern our universe, his aim was always to find solutions to problems. ‘Difficulties’ did not crush him, but were for him, opportunities to exercise all the talents he possessed, and to persist with rigour until answers were found.  In and through his life we see a shining example of the wonderful human capacity to pursue knowledge and truth, and through this pursuit to find ways to benefit the lives of others.  In laying this wreath, let us draw inspiration from his example, so that in our work and endeavours, we may reflect something of Lord Kelvin’s driving force, something of these ideals he so richly embodied."