New research at the University of Glasgow has found that arthritis in cats is far more common than previously thought.

Professor David Bennett in the University’s Vet School, has found that as many as 30 per cent of all cats over the age of eight may be suffering in pain and a reduced quality of life due to arthritis. It has been supposed cats do not suffer from this disease because their symptoms are less prominent than in other species.

Professor Bennett said: “One of the problems has been in recognizing the signs of arthritis in cats and we have always assumed these are the same as in other animals. Arthritis is often a very painful condition and it is always difficult to detect and quantify pain in animals and cats in particular, but what we do know is that cats with arthritis will generally not limp as a dog or as a horse might do.  Also, their joints may not be particularly thickened and crepitus and effusion are rare, again different to other animals.  It is also unusual for them to vocalize their pain but this does not mean that cats suffer from arthritis any less frequently than dogs and other animals”.

A recent study of cats with osteoarthritis by Professor Bennett and his team found that the key to recognising pain in cats is to check for any lifestyle changes which may result from mobility issues. These could include an unwillingness to jump or an inability to jump as high as previously, and a reduction in the cats overall activity levels, such as, sleeping more and hunting and playing less. Because cats often exercise out of sight of their owners, abnormalities in their gait can be difficult to spot." 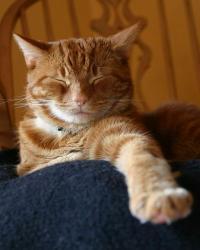 Professor Bennett continued: “In my view, the owner is critical to the diagnostic process. They just have to be asked the right questions. There is undoubtedly a lack of awareness by owners that their cats can suffer from arthritis and they assume that these lifestyle changes such as an unwillingness to jump are just a reflection of ‘getting old’. However, these cats are in significant pain and when given appropriate treatment, they can once again enjoy a much better quality of life, in many cases getting back to their old self.

“Fortunately the emergence of arthritis in cats as a major clinical problem is now being taken much more seriously and pharmaceutical companies are now putting much more effort into developing medicines for treating this unpleasant disease in cats.”

There are currently nine million cats in the UK and a quarter of all households now own at least one cat.  This figure is set to grow with cats starting to overtake dogs in numbers possibly due to more single occupancy households and owners with busy lifestyles.

Cats suffer with arthritis as a result of increasing ‘wear and tear’ due to age or as a consequence of previous injury to the skeleton or due to some developmental abnormality of the skeleton which they may have been born with.  This eventually results in chronic pain and a significant reduction in the quality of life of the cat.

For more information please contact Kate Richardson in the University of Glasgow ’s Media Relations Office on 0141 330 3683 or email K.Richardson@admin.gla.ac.uk