Could Tyrannosaurus rex have been a scavenger rather than a predator?

Although the most famous of dinosaurs, Tyrannosaurus rex still creates controversy among scientists. Some believe that it was a fast-moving fearsome predator, like that depicted in the film Jurassic Park; others believe that it was a sluggish beast that did not attack others but surviving as a scavenger on the carcasses of dead animals, like modern-day vultures.

Previous debate has focussed on the locomotive ability and biting strengths suggested by fossil remains but Ruxton and Houston, from the University of Glasgow, have taken a novel approach and asked, &quot; What sort of environment would have provided sufficient food for a scavenger weighing 6 tonnes (as big as an African bull elephant)?&quot;

Based on analogy with existing animals, they calculated that an ecosystem as productive as the current Serengeti would have provided sufficient carrion for such a scavenger. Hence T. rex need not have been an active predator and could have survived purely by scavenging, like a modern day vulture.

But, as Dr Ruxton explains, their findings lead to more questions, &quot; Given our conclusions, we had to ask ourselves why is there not a T. rex like scavenger on the Serengeti today and why are vultures the only extant vertebrates that have a predominantly scavenging lifestyle?&quot;

The answer may be that an avian scavenger can out-compete a terrestrial one because the key requirement for a scavenger is to minimise energy expenditure whilst searching. Compared to terrestrial locomotion, even powered flying is faster and much less energetically expensive per distance covered and birds like vultures that make extensive use of soaring have dramatically lower energy expenditure than any terrestrial scavenger could have.

Professor Houston continues, &quot; If T. rex was a scavenger, then this was probably only possible because avian radiation had yet to have a substantial effect on ecosystems. It may well be that T. rex was an opportunist flesh eater, combining scavenging carrion with active predation&quot;.

&quot;That said&quot;, he concluded, &quot; our calculations suggest that total (or near total) dependence on carrion (in the manner of extant vultures) may at least have been feasible.&quot;

Professor Houston and Dr Ruxton's findings are further evidence to debunk some of the myths, perpetuated by Jurassic Park and the like, that T-rex was a fearsome predator.

For further information or to speak with either Professor Houston or Dr Ruxton, please call the University Press Office on 0141 330 3535. 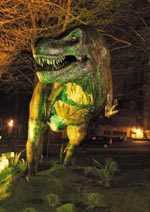