The University of Glasgow has pledged to go ‘further and faster’ in its response to the climate emergency with a raft of new commitments, including a target for net-zero greenhouse gas emissions by 2030.

The ambitious aim is one of a series of actions set out in a new strategy approved by University leaders at a meeting of the University Court and made available online today (Monday 30 November).

The strategy document, titled 'Glasgow Green: The University of Glasgow’s Response to the Climate Emergency', was compiled from survey responses from 1,300 students and University staff, consultation seminars with staff and students, and discussions at the University’s senior management group, senate and student experience committees. 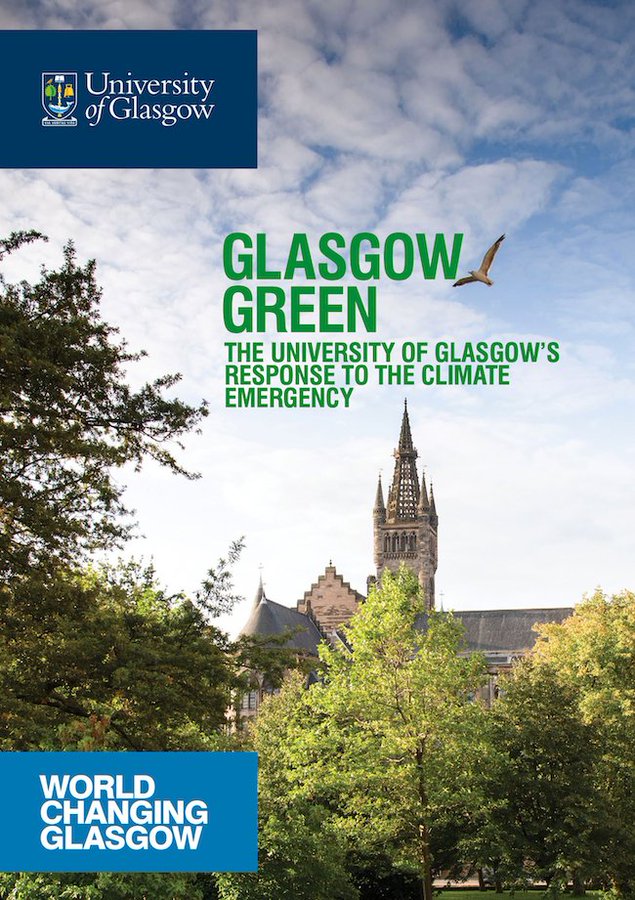 It acknowledges a consensus across the University community that the University must push its ongoing commitment to addressing climate change further.

The document sets out a clear pathway for the University to continue to reduce its carbon footprint and outlines five key sets of climate actions that the University will undertake in the coming years.

Emissions across the University’s campuses have already fallen by more than 13% from 2015/16 levels to 60,358 carbon dioxide equivalents, or tCO2e, in 2018/19. The report identifies a series of actions, including energy efficiency improvements, water source heat pump and solar panel installation, and a reduction in business travel, to further reduce the University’s footprint to 32,000 tCO2e by 2035.

To reach its target of carbon neutrality by 2030, the University will make new efforts in carbon offsetting to help push its net emissions to zero. By investing in high-quality offsetting programmes including reforesting land or restoring peatland in Scotland, and similar projects in low- and middle-income countries around the world, the University plans to not just reduce its footprint but also create opportunities for new research projects.

The University’s Chief Operating Officer and University Secretary, Dr David Duncan, is co-chair of the University’s Sustainability Working Group, which co-ordinated the agreement of the strategy.

Dr Duncan said: “Universities have a unique role to play in the fight against climate change. We are educators, researchers, and contributors to our local communities. It is vital that we rise to the challenge of shaping a liveable world for future generations.

“We believe that our new strategy is a very significant plan to ramp up our existing efforts to deal with the climate emergency, both locally and internationally.”

Professor Daniel Haydon, of the University’s Institute of Biodiversity Animal Health & Comparative Medicine, is also co-chair of the working group. Professor Haydon added: “There’s a clear demand from students and staff that we go further and faster, and we’ve responded with serious new commitments to cut our own carbon emissions and offset the remainder.

“As we head towards the COP26 meeting in Glasgow next year, we now have a clearer roadmap on where we need to be in 2030 to help contribute to that international effort. We’re pleased to be setting out on this journey with students, staff and the local community.”

Liam Brady, president of the Glasgow University Student Representative Council, said: "This strategy is a strong commitment from the University to continue to become more sustainable. Students are well aware of the impact the climate emergency will have on our future so it's great to see the University recognise this and come out with this new strategy. As somewhere that prides itself on changing the world, it is vital that sustainability is a key part of that.

“Universities have an immense amount of influence so it's so important to utilise that and to help lead the way in the fight against climate change."

The five key sets of climate action outlined in the document are:

The University has made the complete version of the Glasgow Green: The University of Glasgow’s Response to the Climate Emergency strategy available online.