Vice-Principal Professor John Briggs, Clerk of Senate since 2012, a former Head of Geographical and Earth Sciences, and a member of staff at the University of Glasgow since 1979 retires today, Tuesday, July 31.

Appointed in 2012 for four years, his appointment was extended with the strongest support in 2016 for a further two years. Professor Briggs led the establishment of the Council of Senate, anticipating the terms of the 2016 HE Governance Act.

Sir Anton paid tribute to Professor Briggs on a number of counts: as a passionate teacher, race equality champion, and leading UK advocate of African development, to which he has devoted his research career.

He also described Professor Briggs’ committed support for the University’s commemoration of the First World War as one example of his sense of duty and responsibility in the role of Clerk of Senate; another example was his attendance record of the number of graduation ceremonies he had attended since 2012 – 118 Bute Hall, six Dumfries, 13 Glasgow School of Art, six SRUC, six PGDE Award ceremonies and six RCVS Admissions ceremonies. 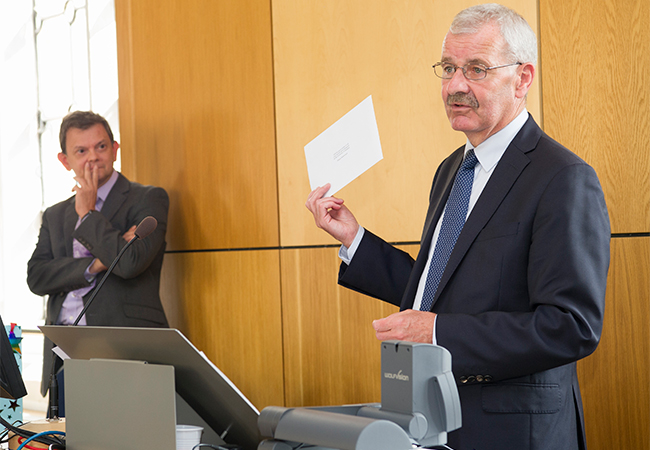 Professor Briggs described how the University of Glasgow had changed since he had arrived in 1979, going from a “quite inward-looking, conservative” university – a “very local regional university” – to one with great international reach, not just in number of international students but also in research, notably in the Global Challenge Research Fund backing it receives for international projects.

He picked out a number of colleagues for particular mention: his research colleagues in Africa; those who worked in Senate – in particular Jack Aitken and Helen Butcher; senior management and also the support staff of the University – janitorial, security, hospitality and cleaning; and his colleagues in GES.

He was presented with a collection from friends and colleagues which he said he would be donating to the St Andrew’s Clinics for Children, which supports and develops health care for children in Africa. With Grant Aid included, the charity will receive around £2,000 with the £805 collected for Professor Briggs and his matching funding.

Professor Jo Sharp, Deputy Head of the Head of Geographical and Earth Sciences, pays tribute to Professor Briggs’ career as a geographer:

It is difficult to imagine Geography at the University of Glasgow without John, and even although he has been in the Senate Office for the last few years, his role in the success of the subject today has been immense.

When John joined geography at Glasgow, the department was not faring quite so well as it is today but he and his fellow “young Turks” (notably Ronan Paddison and Gordon Dickinson) worked to turn things around. John’s leadership of the Department of Geography and Topographic Science (as it was then) marked a period of growth in numbers of geography staff, and these hirings led to the increasing profile of the discipline in both its physical and human manifestations. I think it is clear that our success in the last REF can be traced back to John’s leadership during this period.

John is a passionate advocate for Geography as an integrative, interdisciplinary subject, and this has been reflected in his own research and teaching careers. John’s research has been based in North, East and South Africa on changing agricultural practices, the importance of the peri-urban zone in understanding the dynamics of African cities and, I think most influential, his insistence of the need to take African “indigenous knowledges” seriously in the development process. 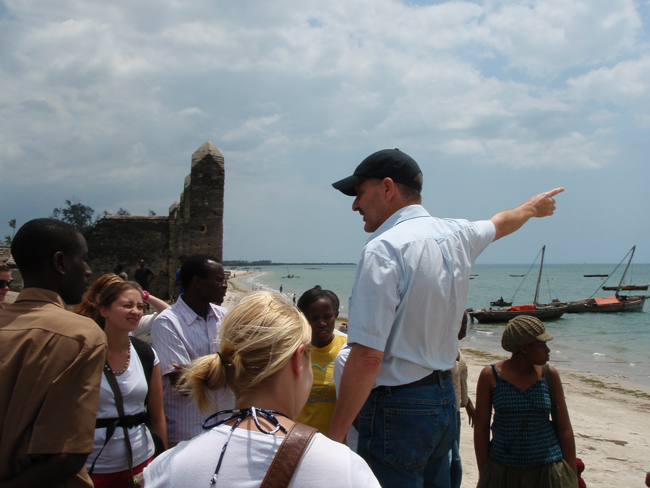 Throughout his career, John has championed the importance of collaboration – there has been no intellectual ‘mining’ of African data, instead John has worked with African colleagues, supporting the career development of many individual researchers, and working to strengthen African research capacity. His conviction about the importance of fieldwork in research has led him to support undergraduate field experiences in Egypt and Tanzania, and PhD students across the continent.

To take one example, John led an academic link between the University of Glasgow and South Valley University in Aswan, Egypt, for many years - a link that involved researchers from Geography but also organic chemistry, botany, and other parts of the university. Despite many challenges – the worst of which might have led others to turn away – John maintained his commitment to his Egyptian colleagues.

When it came to an end in the early 2000s, we calculated that over 100 people had benefited from the partnership, around half of them Egyptians, and, remarkably, about equal numbers of men and women. (This partnership was also the opportunity that initiated my research in Africa when John came into my office one day, nearly 20 years ago, with the intriguing offer: “Do you want to go to Egypt? I need a feminist!”)

John is an inspirational teacher always gaining glowing reviews from students, and attracting large numbers to his Geography of Africa course. His knowledge of, and enthusiasm for, the geography of Africa, no doubt enhanced by his many ‘excellent stories’ (his words!), proved popular year in, year out, and geography students were ‘gutted’ to see him move to the Senate Office when they realised they would miss out. Under his leadership of the department, teaching was always given a high priority – regardless of the pressures of various research exercises, he always ensured that colleagues’ efforts to provide excellent teaching were recognised.

Finally, John has been a wonderful colleague. He has been a mentor to many individuals (including me) while also steering the department through ‘difficult times’ and ensuring we did not make ourselves ‘hostages to fortune’ (again to use his own oft-used phrases). Many of us still seek him out for sage advice about all aspects of university life. He is generous to a fault with his time and clearly cares deeply about the success of the department, taking pleasure in the success of his colleagues.