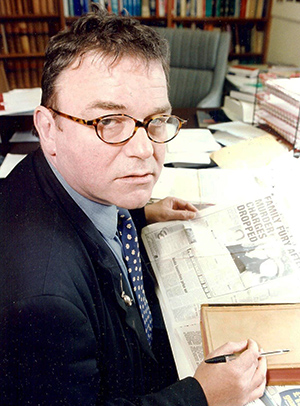 The University of Glasgow - and the School of Law in particular - has been deeply saddened to learn of the death of Joe Thomson, formerly Regius Professor of Law, at the age of 70.

Joe’s entry into academia was an early one, being appointed to his first academic post – as a lecturer at the University of Birmingham – in 1970, the same year that he graduated from the University of Edinburgh with the degree of LLB and the prestigious Lord President Cooper Memorial Prize for the most outstanding graduate in law. Posts at King’s College London and the University of Strathclyde followed, before he was appointed to the Regius Chair of Law at Glasgow in 1991.

During his time at Glasgow, Joe was renowned as an inspiring and entertaining teacher, beloved of generations of students. Generous with his time and encouraging to younger scholars, he was a deputy editor of the Stair Memorial Encyclopaedia (from 1984-1996) and later director of the Scottish Universities’ Law Institute (from 2000-2009), seeking – successfully – in both cases to ensure vibrant and extensive legal scholarship across the full ambit of Scots law.

Joe was elected as a Fellow of the Royal Society of Edinburgh in 1996 and served as the President of the Society of Public Teachers of Law (now the Society of Legal Scholars) from 2000 until 2001, giving him the opportunity to host the Society’s annual conference in Glasgow and to welcome legal scholars from around the country in his inimitable style.

Appointed as a Scottish Law Commissioner in 2000 – a role in which he continued to serve until 2009 – he contributed to a wide range of law reform projects, particularly the Commission’s extensive work on the law of succession, partly implemented by the Succession (Scotland) Act 2016. He continued to produce academic work, and his innovative Scots Private Law – aiming to provide an overview of the subject, and demonstrating the kind of generalist ability all too rare in modern academia – was published in 2006.

In his retirement, by then living in his home town of Campbeltown, Joe continued to make an active contribution to academia, serving as the editor of the Juridical Review – Scotland’s oldest law journal – until 2017, and working on new editions of his textbooks on core areas of Scots private law. A seventh edition of his Family Law in Scotland was published in 2014, and a fifth edition of his Delictual Liability the same year, while a fourth edition of Contract Law in Scotland (a collaborative effort with Hector MacQueen, in which the authors were famously ad idem aside from one specific footnote) was published in 2016. He also served as an Honorary Sheriff in Campbeltown until 2017.

Joe is survived by his wife Annie.