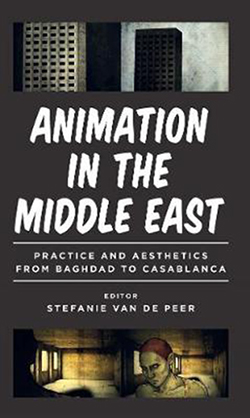 Dr Stefanie Van de Peer, Research Fellow in Film Studies, working on the Africa’s Lost Classics project led by Dr Lizelle Bisschoff, has been awarded the annual BAFTSS award for her edited collection on Animation in the Middle East. Practice and Aesthetics from Baghdad to Casablanca.

The book was published a year ago by IB Tauris and nominated for the BAFTSS Award earlier this year. The awards were announced on 12 April at the BAFTSS conference in Kent.

The panel’s statement reads: “This book is particularly notable for opening up virtually uncharted territory. Its wide geographic scope, negotiation of politically sensitive issues, mix of contributors, and its emphasis on both practice and aesthetics are hugely impressive.

"Also worthy of note is its emphasising of local histories before (but not at the expense of) global or transnational ones, and its well-thought-out structure, which combines chronological, geographic and aesthetic approaches to tease out an ‘imagined chronology’. The editor’s stated aim of rewriting the canon is amply met.”