The current work on Professors’ Square is progressing very well and many of the parking spaces outside Numbers1 and 2 The Square have now been resurfaced. Nine car parking spaces were returned for use on Friday 25 September.

The work in Professors’ Square should be completed by the end of this week (starting Monday 28 September). Work continues on the North Front by the Memorial Gates, but is not expected to shut the thoroughfare at that point.

Next weekend 3/4 October and the following weekend, 10/11 October, trenching work will cross the Main Gate by the barriers. Only one section will be closed at a time and steel plating will be used to keep the roadways open at other times to minimise disruption.

Large parts of University Gardens have been reinstated and resurfaced, although those pipe systems will be extended towards the Gregory Building and Lilybank Gardens.

It is hoped to have University Gardens, upper and lower levels, restored to normal by mid-October at the latest; hopefully sooner. 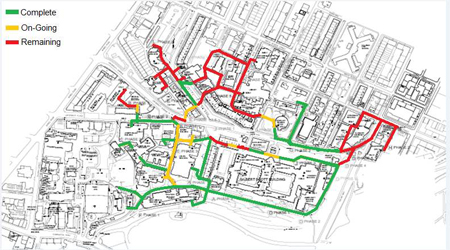 Pearce Lodge will remain closed to vehicles as the district heating system is being taken out through the gateway and on to Kelvin Way / University Avenue. Traffic is being directed up the slope to the North Front and can exit via Dumbarton Road Gate or Chemistry Gate. The temporary traffic lights by University Place have been taken away just for the duration of the Glasgow holiday weekend.

There is a one-way system in place to try to avoid gridlock when drivers are trying to exit the main campus.  Cars parked on the Pearce Lodge (east) side of the flag pole on the South Front are recommended to turn left when leaving and to follow Engineering Way and the ramp up to the North Front. You will NOT be able to exit via the Main Gate, but will be able to pass through Professor's Square and out via the Dumbarton Road Gate or the Chemistry Gate (by the Joseph Black building) which takes you on to University Place by the Wolfson building.

Looking ahead slightly, work will be continuing in Bute Gardens and in the vicinity of the Adam Smith building. More news on that when we get it. It is also likely that towards the latter part of October the upper part of Lilybank Gardens will be closed to traffic (not pedestrians). At that point, the LOWER section of Lilybank Gardens will be used as the access for the larger car park on Ashton Lane that is administered by the council, but also for the use of University parking permit holders. 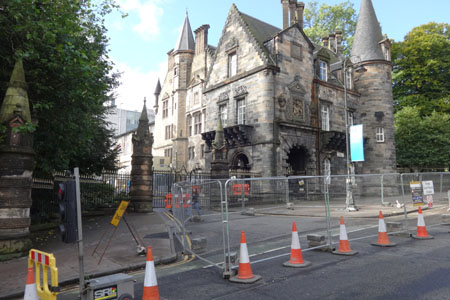 One of the footpaths between the QMU end of University Gardens and the area behind the Adam Smith building and LIlybank House has been closed. This is to allow safe excavation of trenches to carry the new University district heating scheme. The path will be open again from 2 October. A parallel pathway is still open and brings you out by the Sir Alexander Stone building.

Are we missing anywhere?  Let us know.‌

Our Big Picture map details the progression of the work, and the associated trenching, through to the end of October.

Thanks very much for your forbearance!

The District Heating Scheme project is going to involve laying in the region of five and a half kilometres of new pipework across the University campus (both sides of University Avenue) over the next seven months or so.

This is to replace the old system, which was more than fifty years old. In some cases, the new network will also help facilitate high voltage and IT cables to improve campus services.

'Rough' guide to getting around Campus this September.