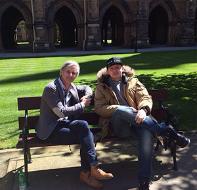 Rapper and singer-songwriter Professor Green visited the University of Glasgow in June to film part of a documentary on male suicide called “Professor Green: Suicide and Me".

Prof Green met with Professor Rory O’Connor, UofG’s expert on the psychology of suicide, in the Quads of the University.

Watch the documentary on 27 October on BBC 3 at 9pm or on BBC iplayer. 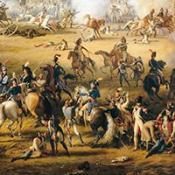 The lectures took us from Glasgow's perspective on the French wars to Scotland's commemorations of them after victory, and we saw Britain's role against the backdrop of the wider European setting.

We heard about the impact of the long-drawn out conflict on the lives and fortunes of those waiting back at home; and we heard first-hand accounts of some of the Scots forces directly involved in the battle. We even saw up-close (and handled for ourselves) artefacts from the battle itself - the tip of a scabbard, the debris from a cannon-shot, a spent musket ball flattened from impact with its target.

In the middle of the day, our audience visited a break-out room filled with all sorts of weaponry and relics from the battle.

It was a wide-ranging day, concluding with a lively Q&A session with all the day's speakers. The Centre would like to thank everyone who attended - from the experts to the enthusiastic audience.

The day was a great of example of lifelong learning in practice and demonstrated yet again how the Centre acts as a gateway for the public to the best the University can offer.

We're working on making video highlights of the day available shortly on the Open Studies website.

On 12 November, the ESRC’s Alison Weir will be making a visit to the University. Alison is both the nominated liaison for the University of Glasgow, and Senior Policy Manager, and will be coming to talk to you about this important funder’s future plans.

Alison will also be taking questions from the floor.

If there’s anything that you’ve ever wished to ask the ESRC, now’s your chance.

For more details and to register for this free event, please visit Ask the ESRC.

Choral Stimulation in final of The Naked Choir

University of Glasgow a cappella singing group Choral Stimulation have beaten off competition from around 400 choirs to reach the final of The Naked Choir.

The BBC show features a cappella groups singing without instuments or backing and Choral Stimulation have madethrough the heats to the final show.