The botched demolition of the Red Road flats in Glasgow at the weekend had one silver lining - a potential big boost for research being carried out at the University of Glasgow. 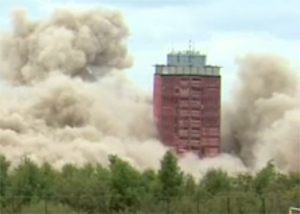 Monday's media devoted large swathes of newsprint and many minutes of broadcast and online coverage to the dud demolition. The Glasgow Housing Association apologised after its attempts to bring down the iconic Red Road flats in Glasgow left two of the six towers largely intact.

It meant that about 2,500 people who live inside the exclusion zone set up for the demolition faced delays in being allowed back into their homes.

Demolition experts are now assessing how best to bring the two remaining blocks down.

The Housing, Everyday Life and Well Being team at the University of Glasgow has been studying the long term experiences of those who were rehoused in high rise flats during the 1960s and 1970s. The renewed media coverage after Sunday's events put their work in sharply focus with numerous references to their work in all the main news outlets.

Professor Lynn Abrams, Professor of Modern History, who is leading the research, said: “Red Road polarises people. The flats undoubtedly became the symbol to some of all that failed in the city's high rise experiment, associated with isolation, anti-social behaviour and crime.

“To others, however, it was home. This is where they grew up, where they raised their children. They were an improvement on the housing conditions many had endured in Glasgow's overcrowded and substandard rented sector, they were modern with all mod cons including hot water and indoor WCs."

Professor Abrams is hoping to get many more people to complete the online questionnaire that is helping inform the research.

Have you got your own stories of high-rise living?

The team has a short questionnaire at http://glasgowhousing.academicblogs.co.uk/get-involved/

For more information on the project visit: www.glasgow.ac.uk/housingandwellbeing

or email the team at multistoreymemories@gmail.com