A team of ten Glasgow undergraduate students participated in the 12th annual iGEM competition, a summer-long synthetic biology project, culminating in the giant Jamboree in Boston on 24-28 September.

More than 250 teams from around the world presented their projects aimed at solving real-world problems using Synthetic Biology. The Glasgow team developed ‘Furri-Lux’, an educational nightlight powered by bioluminescent bacteria, with the aim of teaching children and their parents about Synthetic Biology. Their project won a prestigious gold medal and nominations in two special prize categories. 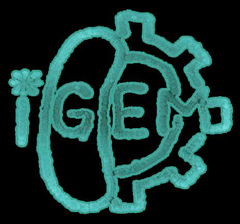 The Glasgow project, ‘GlasGlow’, was an educational nightlight powered by bioluminescent bacteria, aimed at explaining Synthetic Biology to children and their parents. The students optimized a metabolic pathway (Figure 3) that produces light in bacteria, and engineered a genetic switch to turn off the bioluminescence during the day. They used 3D printing to produce a prototype bioreactor which they fitted into their furry nightlight monster – Furri-Lux – who was a big hit at the Jamboree in Boston.

The team, supported by Dr Sean Colloms, Dr Julien Reboud and Dr Stephanie Holt, and aided by Max Derksen (undergraduate student in Physics), obtained a gold medal for the second year running, and was nominated for two special prizes, testament to the hard work and dedication they put into their work over the summer.