The University of Glasgow was prominent in a major Holyrood event to showcase undergraduate entrepreneurship talent. 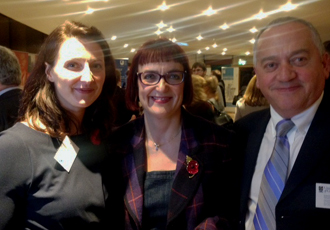 Organised by Universities Scotland and hosted by Liz Smith MSP the event in a packed Members’ Room on Tuesday 10 November involved representatives from all 19 of Scotland’s higher education institutions.

The University of Glasgow stall was staffed by Dr Jillian Gordon and Dr Paul Ferri from the Adam Smith Business School and Marion Anderson, Student Enterprise Manager with the Careers Service.

They were joined by two innovators. Former student Susanne Mitschke who demonstrated the award winning MindMate application which has been developed to assist dementia sufferers, their relatives and carers; and Omar Tufayl, a third year computing science student who has created a social media app called Nom Yap which aims to make it easier for students and staff to meet people and make connections on campus.

Several MSPs, including Angela Constance, the Cabinet Secretary for Education and Life Long Learning, spent time discussing the projects and the support that the University of Glasgow gives to budding entrepreneurs.

Breaking News...Marion Anderson, the University's Enterprise Manager, tells us: "MindMate just won £10K from ScotEdge. That is a fantastic achievement given it is the first time they have applied to ScotEdge and it was the full amount that they asked for. Hopefully some of the contacts that they made at the Scottish Government reception will work well for them too!"