Night at the Museum

Night at the Museum

The Hunterian Museum is hosting an event to commemorate the centenary of the sinking of the RMS Lusitania.

The event will involve an illumination and sound installation inspired by WW1 events, along with a series of film and image projections, refreshments and pop-up shop

About the RMS Lusitania

She was the largest, fastest and most luxurious ship of her generation and when she sank in 1915 a country went to war.

In 1903, British owned company Cunard Line decided to commission the building of two new ships which were to be the world leading.

The contracts for the two ships were signed in London on 18 May 1905 at a meeting between Cunard and two shipbuilders - John Brown & Co. at Clydebank and Swan, Hunter & Wigham Richardson Ltd. at Wallsend.

At Clydebank the first sections of the keel for yard no.367 (later to be known as Lusitania) had already been laid down on the slipway on 17 August 1904. The delay in signing the contract resulting from detail changes having to be made.

The enormous scale of the construction of Lusitania involved the shipyard in considerable expense in the provision of additional plant and facilities to cope with this.

The launch took place at 12.30 on 7 June 1906 when Lady Inverclyde (the widow of the former Cunard chairman) broke the customary bottle over the bows thus sending the ship into the River Clyde.

After trials, the maiden voyage from Liverpool to New York was commenced on 7 September 1907. The following month she broke the North Atlantic speed record.

The Lusitania later made her fastest ever average passage in 1909 when she achieved 25.85 knots.

The Lusitania continued uneventfully on her North Atlantic passages up until the outbreak of World War I.

Originally it had been planned that The Lusitania would be used as an armed merchant cruiser but these plans were abounded due to her size and fuel consumption.

She therefore continued on her Liverpool New York passenger service.

Before she left New York on 1 May 1915 the German authorities in the U.S.A. published warnings that she would be attacked by their submarines and advised passengers not to sail.

As she approached southern Ireland, nearing the end of her crossing, it appears that the British Admiralty gave her no warnings of known U-boat activity in the area.

At 2.15pm on 7 May a torpedo from the submarine U20 struck her starboard side. This was followed quickly by another explosion thought initially to have been caused by a second torpedo, but which is generally accepted to have been an explosion on board the ship itself.

The Lusitania sank within twenty minutes.  In total 1,959 people died.

Much has been written regarding the legality of the German action against an apparently innocent merchant ship with some sources claiming that the ship was carrying ammunition as cargo. The resulting outrage felt in the USA is said to have been a factor in bringing America into the war in 1917.

Lusitania’s Tyneside-built sister ship Mauretania survived World War I and went on to have an illustrious career as one of the most popular ships of all time. 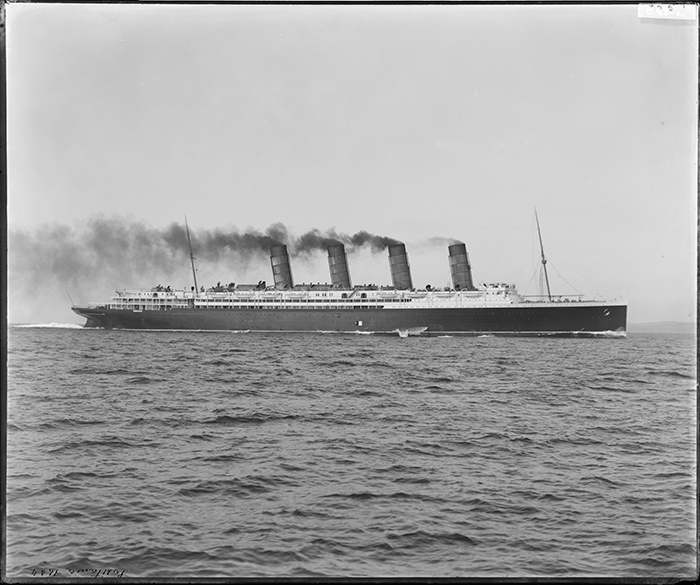