A high profile ambassadorial visit, and vital work on the district heating scheme, made Monday a busy day on campus. 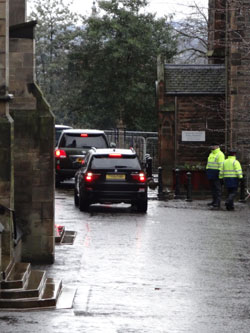 Part of Professors' Square was cordoned off by Police Scotland as a security measure for a visit to the University by the Israeli Ambassador to the UK, Daniel Taub.

The Israeli Ambassador was invited to the University by academic colleagues. Security arrangements for the event were coordinated by Police Scotland working closely with the University's own security staff.

There was a peaceful demonstration by a pro-Palestinian group at the Main Gate and later in the Square. The University's media statement said: "We will also be welcoming the representative of the Palestinian Mission to the UK to the University of Glasgow next month.

"We regularly host high profile individuals to our campus and believe that our students should have access to a range of perspectives on important issues. Contrary to some reports, there is no plan to formalise any links between the University of Glasgow and the Hebrew University in Jerusalem.’

The project is replacing the existing, fifty year old steam heating system with new technology that will serve most of the Gilmorehill campus - both sides of University Avenue - and will produce large savings in energy costs.

The district heating network will eventually be powered by a Combined Heat and Power engine which will not only produce heat...but can also generate electricty either for the University or for the national grid.

This phase will last about four weeks and will mean the closure of the road between the Davidson Building just East of Science way and the Flag Pole.

Staff wishing to travel from Dumbarton Road Gate beyond Science Way will be unable to do so and should enter through the Main Gate or Pearce Lodge. Pedestrians will still be able to use the footpath.  The Campus Map gives you an idea of the excavations being planned and the time-line.

The District Heating Scheme works are being used by the College of Science and Engineering as a learning and teaching resource. It's hoped that many opportunities will arise over the comings months to let students study the installation works in detail. One of the first opportunities came with test borings on the site for the Combined Heat and Power engine which will provide the energy for the system.