Hundreds turn out for 'Charlie'

The Principal's Piper, Donald Campbell, led the academic procession into the hall at the start, accompanied by his brother, the writer, broadcaster and former Labour spin-doctor, Alastair Campbell. 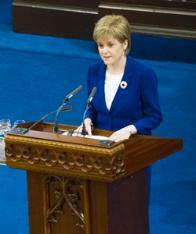 The Bute Hall was packed with University staff members, students and alumni together with many members of the public.

The First Minister spoke to deliver one of the readings: John 14:1-6 containing the University's motto- I am the way, and the truth, and the life.

During her tribute to the two-term Rector, the current SRC President, Breffni O'Connor said: "Charles was one of the first figures that I, and many of my peers would have encountered at this University, he was there to welcome us at the momentous Freshers’ Address, giving up his time to tell us how it was in the old days.

"And along with rehashing memories of his time here, at each Freshers’ Address he delivered an important lesson, which read: it’s very important you graduate with a degree but remember the University gives you your degree, but the student bodies give you your education.

"Charles - you did a good job. Simple as that." Principal Anton Muscatelli

"Charles Kennedy knew us, because he was one of us. He knew the ambitions of students, and he recognised the value of every aspect of the student experience offered at Glasgow and encouraged us to make the most of that."

Among the many moving highlights of the service were the performances of the University Choir, who performed Thomas Tallis's O Sacrum Convivium, Robert Burns' Ae Fond Kiss and the Iona Boat Song.

In his tribute, the Principal and Vice-Chancelolor, Professor Anton Muscatelli, said: "His wisdom, insight, generous support through the good days and the bad, meant much to me.  He was interested in the politics of universities. He once joked to me that the internal politics of a university had all the combative elements of the House of Commons combined with the lack of party discipline of the Lords.

"Charles took his role seriously, if not himself, and spoke to management and Court on behalf of what he called ‘his other constituency in life’ – his students. A calm, reasoned and reasonable advocate: there were no fights, there was never any acrimony, just a loyal commitment to his brief – he knew the power of words and the power of persuasion and the immense power of humour to diffuse and disarm.  And all deployed for the benefit and support of the student body he loved.

"He was self-deprecating about politics. As he said himself: ‘I would rather long-term trust a graduate than shorter–term trust a government’. And many would echo this sentiment when thinking of Charles: a graduate, and more significantly a Glasgow graduate, we and so many others could ‘long-term’ trust him as a friend."

The memorial service was led by the University Chaplain, Stuart MacQuarrie. It was widely followed by the audiences on social media. You can follow the story of the evening on our Storify feed.

A memorial fund is being set up by the University of Glasgow to commemorate the life of Charles Kennedy. The aim of the fund is to name a major teaching area within the planned new Learning and Teaching building at the University. ‌The initiative has been given the full support of the former Liberal Democrat politician’s family.