Historic links stretching back more than two-and-a-half centuries between the Universities of Glasgow and McGill in Montreal have been cemented in a Memorandum of Agreement which will deliver substantial benefits to staff and students in the future.

The strategic partnership between the two universities will increase their capacity for collaborating in teaching and research activity which will offer tangible benefits to staff and students from both institutions. 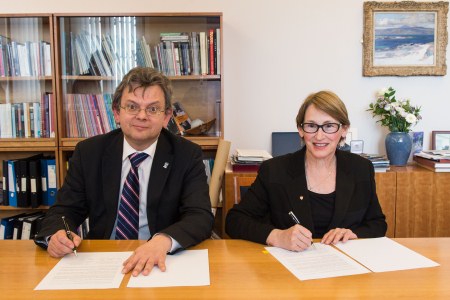 Principal and Vice-Chancellor of the University of Glasgow, Professor Anton Muscatelli, said: “Over the next five years we plan to work together to create flexible arrangements for student mobility and offer additional opportunities for academic staff to work together on some of the grand challenges facing communities across the world. The creation of a jointly supported Principals' early career exchange fellowship scheme will mark the first concrete expression of this important strategic partnership.

“One of the most exciting elements of this agreement is our plan to explore the creation of open mobility for our general humanities and sciences students. This would offer a vastly enhanced range of courses taught by world-class academic staff and would place McGill and Glasgow at the frontier of mobility and student opportunity.”

McGill's Principal and Vice-Chancellor, Professor Suzanne Fortier, said: "McGill is honoured to launch a new chapter in the long-term relationship between our institutions. By signing this agreement, we celebrate the historic intellectual and research ties that bind our universities. At the same time, we recognise the importance of bringing great minds together for collaboration on new research initiatives and of providing enhanced learning opportunities for our students."

The founder of McGill University – James McGill – was an Arts student at the University of Glasgow in 1756. He was born in Glasgow on 6 October 1744, but went to Canada before the American Revolution after receiving his education at the University.

McGill was initially engaged in the north-west fur trade, before becoming a merchant in Montreal in partnership with his brother Andrew. There he became known as the “Richest man in Montreal”.

He died in Montreal in 1813. In his will, he bequeathed £10,000 and his forty-six acre Burnside Place estate to the Royal Institution for the Advancement of Learning with the condition that with his bequest a university was to be created in his name and established within ten years of his death.

In recent years, it has become clear that a substantial number of staff at the two universities were already working closely together. Both universities believe there are significant benefits in building a deeper and more strategic relationship from these organic roots.

The partnership will prioritise the following areas for development initially:

• Joint or shared research appointments;
• A jointly-developed Early Career Mobility Scheme, with the double objective of promoting mobility and resource sharing between Glasgow and McGill, and initiating the seeds of future research collaboration;
• The development of joint PhDs;
• The development of prestigious and competitively awarded Glasgow-McGill Exchange Scholarships for students.

As the partnership evolves, the two universities will also work together in other areas such as:

• Collaboration in accessing European research funding – a bilateral agreement to pool resources in this area and pursue systematic collaboration;
• The identification of flagship joint research initiatives in areas of high complementarity;
• The creation of joint institutional facilities on one or both campuses;
• The development of a Joint Teaching and Learning Platform to focus on curriculum mapping and innovative approaches to joint delivery;
• The provision of Transnational Education activity.

Professor Muscatelli said: “There is a substantial alignment between Glasgow and McGill in a broad range of activities. Both universities enjoy robust and increasingly established reputations as global universities while retaining their civic roots and local engagement. Both have strong connections to the culturally innovative cities of which they are a part and both are known for maintaining an applied and balanced commitment to both learning and teaching and research. Crucially, both are seeking proactively and publicly to further globalise across a broad spectrum of their activities.”