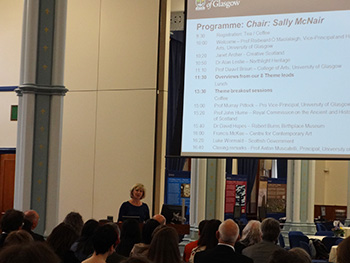 On 5 June, the College of Arts held its second Industry Day.

The event was an opportunity for organisations from both the private and public sectors to learn of the many ways in which they can benefit from the strengths and resources of the College of Arts.

More than 230 people registered to attend the event which was chaired by BBC Scotland’s Sally McNair and featured experts from arts, cultural and creative sectors.

No strength without unity

Head of the College of Arts Professor Roibeard Ó Maolalaigh opened the event. He spoke of the Colleges commitment to sharing knowledge with industry.

Professor Ó Maolalaigh said: “There is a Gaelic saying ‘Ní neart go cur le chéile’ which translates as ‘There is no strength until we pull together’.

“For me, that saying sums up what Industry Day is all about.”

Chair Sally McNair spoke about times she has used resources from the College of Arts to help with news stories which she has covered and other journalistic pieces.

She said: “I have made great connections at the University and today, I hope you can too. You have access to an Aladdin’s cave of archives, experts, materials and research.” 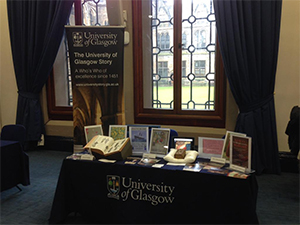 ‌After a morning of talks detailing some of the successful partnerships the College has carried out with non-academic organisations, the afternoon gave attendees the opportunity to focus on the areas most relevant to them by taking part in breakout sessions.

The themes of the breakout sessions were:

Buzz in the Hunter Halls

Dr Fraser Rowan, Business Development Manager in the College of Arts said: “Engaging with industry is second nature and crucial to our sustainable success as well as that of the Arts, Cultural, Creative, Heritage and Tourism sectors in Scotland.

“From providing teaching resources into the hundreds of schools across Scotland to shaping government policy on heritage preservation, we have an extremely diverse range of expertise that is available.

“Attendees seized the opportunity to engage and exchange ideas which created a real buzz in the Hunter Halls and in the breakout sessions, which in turn made for a very productive event.”