‌A short film of Jimmy Reid’s famous 1972 Rectorial address in Bute Hall was played before her speech, when he argued that humans are social beings and not rats.

“The reason that speech has endured is that Jimmy was making a moral case.

"He was articulating the values which he exemplified throughout his life…so when people sign up to the values of a rat-race, if they are blind to the misfortunes of others, they lose part of their own humanity.”

The First Minister used the Jimmy Reid Rectorial address to reflect the current changes being proposed under the UK Government’s Trade Union Bill.

The Bill proposes to restrict time spent on union activities; ban the mechanism where members can pay union membership through their salary; and allow employers to call in agency workers if employees go on strike.

The First Minister said the Scottish Government would refuse to willingly cooperate with such regulations and warned the SNP would “vigorously oppose” the bill and Scotland would not comply with its changes if it went through.

Professor Anton Muscatelli, Principal and Vice Chancellor of the University of Glasgow, opened the lecture with a welcome speech, and the event was chaired by Grahame Smith, General Secretary of the STUC.

Looking back at Jimmy Reid: the working rector

Jimmy Reid has strong links with the University, having been University Rector from 1971 to 1974. The University Archives also holds much material relating to Reid and the USC work-in, writes Roz Ryan-Mills, University of Glasgow Archives Graduate Trainee. 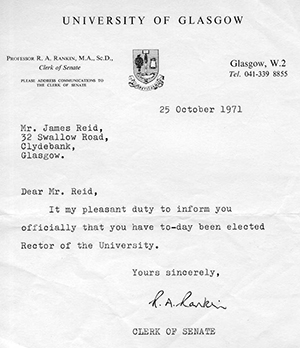 Jimmy Reid was born in Govan, and became a shipyard worker and trade union official. He was famously one of the leaders of the Upper Clyde Shipbuilders Work-in between June 1971 and October 1972.

During this time he stood for the 1971 University of Glasgow rectorship. His opponents included the Labour MP and University graduate Margaret Herbison and the Conservative MP Teddy Taylor.

The poet Roger McGough and the television personality Michael Parkinson were not allowed to contest the election on the grounds that their papers were not in order.

During his rectoral address in 1972, which coincided with the announcement that the fight for shipbuilders jobs in Clydebank had been won, Reid famously condemned the ‘rat race’. He asked students to reject the individualism and greed that had led to a growing disparity between the ‘haves’ and the ‘have-nots’. 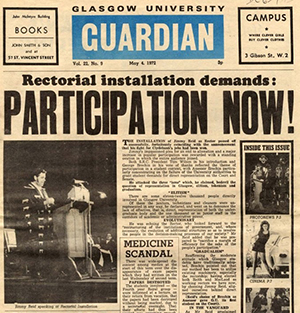 His message made international headlines, with the New York Times printing the speech in full and naming it ‘the greatest speech since President Lincoln's Gettysburg Address’.

A proponent of direct representation, Reid strongly encouraged student participation during his rectorship. While the previous rector Lord McLeod had promised to install a student assessor, it was Reid who finally managed to deliver.  George Brechin, the then, SRC Senior Vice President was appointed as Rector Assessor soon after Reid’s installation. Brechin himself was elected by the student body, giving students their first ever voice on the Court

The rector also stood alongside students in many protests against the impending reforms of the time.

He was reported to have attended the December 1971 demonstration against the move to give University authorities control over student funds. He was also present at one of the largest N.U.S. demonstrations against the cutting of student grants in February, 1974.

A true working class hero and advocate of the right to work, Reid will be remembered as one of the most important political figures of our time.

If you would like to know more about our Jimmy Reid collection (DC455) you can view its entry on ArchivesHub view our Flickr set, and email the Duty Archivist to make an appointment to see the collection in person: enquiries@archives.gla.ac.uk