Showing of 'Ivory Tower' on campus

The acclaimed US film 'Ivory Tower' is being shown on campus next month. 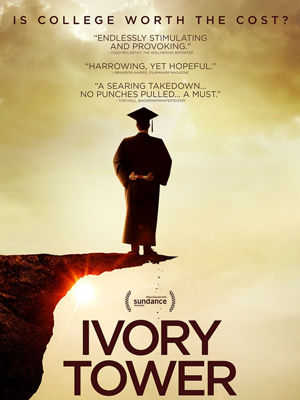 The SRC President, Liam King and The Herald's Education Correspondent, Andy Denholm, have agreed to take part in discussion after the screening.

The organisers say the debate will ask: is a university degree a luxury or a sideshow in austerity Britain, which doesn’t square up with the realities of twenty-first century living? Or does post-secondary education have a universal social value, which all tax payers should consequently pay for? If so, can Scotland lead the UK in proving it?

'Ivory Tower' is focussed on the US, but has universal significance: award-winning filmmaker Andew Rossi assembles an urgent portrait of higher education at a crossroads. Capturing protest, alternative models, social trends and the economic big picture, Ivory Tower is a film to fire the minds of everyone who pays tax, has children, wants to study, or has lost or gained from today’s university-oriented society.

The film was named one of the best documentaries of 2014 by Indiewire. Frank Bruni of The New York Times called the film "an astonishingly thorough tour of the university landscape." Matt Goldberg in his review for Collider said that "Ivory Tower almost seems ambivalent about the college crisis, but it’s never cold or emotionless." Todd McCarthy of The Hollywood Reporter gave the film a positive review, calling it "a stimulating and upsetting look at how high tuition and huge student loans have created a perfect storm over American colleges."

To book a ticket for this free event, please visit Ivory Tower.