Kilts swayed rhythmically to the skirl of the pipes and the beat of the drum as alumni and staff joined Tartan Day Parade along 6th Avenue earlier this month – one of the highlights of Scotland Week in New York.

The Principal and Vice-Chancellor, Professor Anton Muscatelli, along with Vice-Principal and Head of the College of Social Sciences  Professor Anne Anderson, hosted a reception in the magnificent setting of Carnegie Hall for the University’s American alumni and friends.

Among their honoured guests were Fiona Hyslop, Cabinet Secretary for Culture, Europe and External Affairs, and Glasgow’s Lord Provost, Sadie Docherty. A cheque representing $80,000 of alumni gifts was presented by American Alumni of Glasgow University. 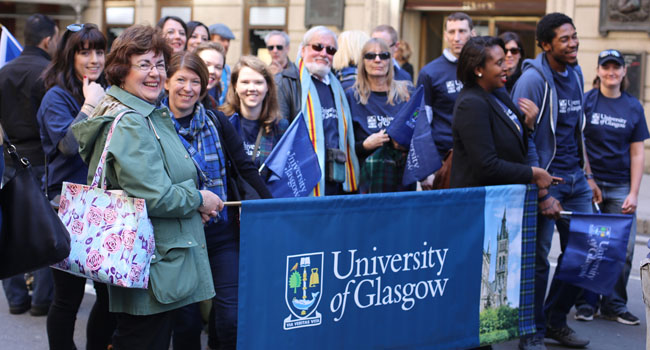 The week was also an opportunity for the University to reaffirm its links with Columbia University in New York, one of its strategic partners in higher education.  Professor Chris Carman, head of the University of Glasgow’s School of Social and Political Sciences, gave a lecture analysing the Scottish Independence Referendum; Professor Jim Tomlinson, Professor of Economic and Social History, gave a separate lecture on 'De-industrialization but not decline: Britain since the 1950s'. Professor Bob Davis, head of the School of Education, gave a lecture at Columbia’s Teachers College.