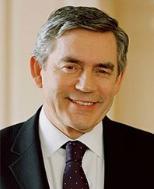 It has been confirmed that the former Prime Minister and Labour Party leader, Gordon Brown, will deliver a keynote lecture at the Sir Charles Wilson Building on Wednesday 29 April.  Doors will open at 5pm, and the lecture will start at 5.30pm.

Mr Brown is also to receive an honorary degree of Doctor of the University.

Tickets for the event have now all been allocated after being offered to staff and students.

Last month it was announced that the University is also to confer an honorary degree of Doctor of the University on the former Scottish First Minister, Alex Salmond. ‌

Mr Salmond will receive his award before delivering a public lecture in the Bute Hall on Tuesday 21 April at 1800. Tickets for that event have all been allocated.

The University is expected to continue being a major forum for debate during the remainder of the Westminster election campaign: the BBC recently staged their 'Big Debate' on campus, the University hosted a lecture by Professor John Curtice, and recently the QMU held the first hustings involving the leaders of the four main parties in Scotland. It's expected that BBC News and Sky News will both be broadcasting current affairs output live from Gilmorehill in the weeks ahead.

The Principal and Vice Chancellor of the University of Glasgow, Professor Anton Muscatelli said, “The decision by Senate to confer the honorary degree of Doctor of the University on Alex Salmond and on Gordon Brown continues the long tradition at Glasgow of recognising major contributions to public life from across the political spectrum. Previous recipients of honorary degrees have included Donald Dewar, Sir Menzies Campbell, Charles Kennedy, George Younger and Winnie Ewing.”

“The University of Glasgow has always been a crucible for debate, and at no time was this more apparent than during last year’s referendum when we hosted several significant speeches and events, linking the politicians to the people of this city and beyond.  It is fitting that both of these major political figures are being honoured in this way and at this University.”