25 April is International Marconi Day, an international, 24-hour radio event falling on the birthday of Guglielmo Marconi to celebrate his involvement in the invention of wireless telegraphy and the radio.

In honour of this communication-themed celebration, we will feature the stories of the University of Glasgow’s involvement in pioneering telecommunication!

Kelvin and the Cable: 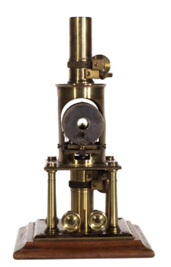 ‌The University’s Lord Kelvin was instrumental in the first telegraph cable to be laid across the Atlantic Ocean.

‌In 1856 Kelvin became Director of the Atlantic Telegraph Company, which was working to install this long-distance telegraph to open up communications across the globe.

While the first Atlantic Cable Expedition in 1857 was a failure, the team succeeded the next year using an instrument called a mirror galvanometer, invented by Lord Kelvin, to measure electric current flowing through the cable.

‌Signals were lost shortly after this initial success but the venture finally succeeded in 1866 and the cable was laid at the British end from Valentia in County Kerry, Ireland, to Trinity Bay on the East Coast of Newfoundland.

Following the successful installation of the first trans-Atlantic telegraph cable, British expertise in cable-engineering was recognised internationally. Kelvin's techniques and instruments were used for cables in various parts of the world, including Europe and South America and many of these cables remained in use until well into the 20th century.

Another pioneer in terms of telegraphy and radio technology is University of Glasgow student Rinzaburo Shida. Rinzaburo Shida (1855-1892) was one of the first four Japanese students to attend the University of Glasgow in 1880. He was part of an academic study abroad programme sponsored by the Japanese Meiji Government as part of their national strategy to import applied science and technology. He matriculated in session 1880-1881, aged 24 and worked with Lord Kelvin on electromagnetism and telegraphy. He took classes in Mathematics and in Natural Philosophy (Physics). He excelled as a student, gaining second place in the senior mathematics class, first place

Shida returned to Japan in 1883 and was appointed Professor of Natural Philosophy at the Imperial College of Engineering, the first Japanese to teach in the telegraphy department. Shida led the development of radio technology in Japan: the first transmission experiments, conducted in 1886, were due to Shida and he also founded the Institute of Electrical Engineers of Japan in 1888, and was given the title of Doctor of Engineering. 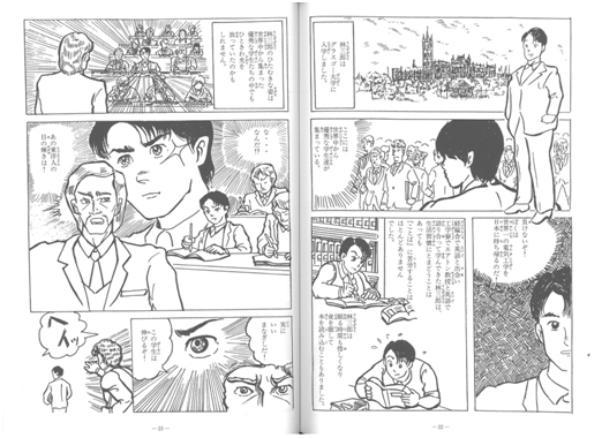 A further development of telecommunications was the transmission of an image as well as sound.

John Logie Baird, an inventor and pioneer of the television, studied Engineering at the University of Glasgow during the session 1914-15.

Baird later achieved fame for his work developing television, giving the world’s first demonstration of a practical system in front of members of the Royal Institution on 26 Jan 1926.

In 1928 the Baird Television Development Co made the first transatlantic television transmission, and during the 1930s and 1940s succeeded in developing colour television. 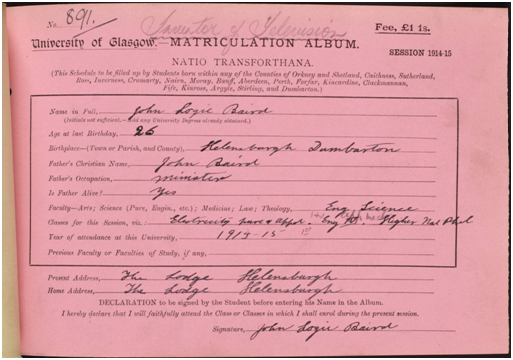 For any questions or further information about the University’s historical collections, please e-mail the Duty Archivist on: enquiries@archives.gla.ac.uk