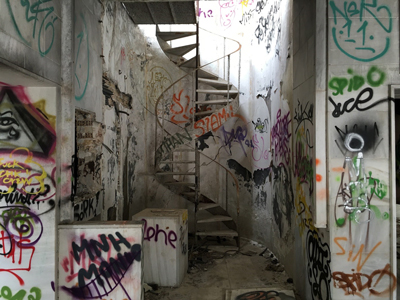 Over the course of three events held through 2017-18, the programme explores the politics and poetics of ruination through moving image works by a range of artists and filmmakers.

For this, the third and final screening in the series, we focus on the built environment, states of un-building and narratives of timely political resonance.

Bernd Behr’s Weimar Villa (Unreconstructed), (2010, High Definition video, colour, stereo, duration: 9 mins 22 sec) chronicles part of a New Town development in China designed by Albert Speer Jr. It considers the 'ruin value' of the eponymous Bauhaus-themed gated community, inhabiting a perpetual moment in the cycle of construction and excavation, an image suspended between an incomplete destination and an uncertain origin.

Willie Doherty’s Remains (2013, High definition video (colour and sound), duration: 15 mins) is a powerful fictitious film based on real events. As part of a spate of punishment shootings in Derry carried out by the dissident Republican group Republican Action Against Drugs (RAAD) during 2012, a father was ordered to bring his son and another boy, a cousin, to a specified location to be ‘kneecapped.’ Such punishments were administered by the IRA to control drug use or anti-social behaviour during the conflict in the North of Ireland but are now used by dissident republicans to exert control. Commenting on the work Doherty stated 'I revisit these same locations in Remains to explore the idea of the generational nature of the conflict, how it passes through families and the vicious circle that people can get caught up in'.

William E Jones’ Fall into Ruin (2017. High definition video. Duration: 30 mins) tells the story of the artist’s relationship with Alexander Iolas (1907-1987), a Greek art dealer from Alexandria active in New York and European cities from the mid-1950s to the mid-1980s. Iolas had close connections to the Surrealists, to artists associated with Nouveau Réalisme, and to American artists such as Ed Ruscha, Harold Stevenson, and Paul Thek. At the height of his career, he maintained galleries in New York, Paris, Madrid, Geneva, Milan, and Athens. After Iolas’s death from AIDS in 1987, the art collection in his house disappeared; this collection included Egyptian, Greek, and Roman antiquities, as well as works by artists Iolas represented, including Max Ernst, René Magritte, Man Ray, Victor Brauner, Matta, Yves Klein, Takis, and Niki de Saint Phalle. The empty house was later vandalized extensively. For Fall into Ruin, Jones returned to a place he first visited when he was 19 years old. The film includes not only contemporary images of the site in its ruined state, but also photographs Jones took in 1982 of Iolas’s house in its glory. Fall Into Ruin is shown courtesy of The Artist and The Modern Institute/Toby Webster Ltd, Glasgow.