A Journey to Allyship

Allyship is a proactive ongoing, and incredibly difficult practice of unlearning, and re-evaluating, in which a person of privilege works in solidarity and partnership with a marginalised group of people to help take down the systems that challenge that group’s basic rights, equal access, and ability to thrive in our society. (Rochester Racial Justice Toolkit, 2020)

What is an Ally?

An ally is someone who makes the commitment and effort to recognise their privilege (based on gender, class, race, sexual identity, etc.) and work in solidarity with marginalised and underrepresented groups.

Much has been written on allyship. To help you consider what type of anti-racist ally you can be, considering your role, remit, and opportunities to engage within the University, we share the seven types of allyship:

When an ally takes on the role of sponsor, they vocally support and endorse the work of colleagues from underrepresented groups in all contexts, but specifically in situations that will help boost those colleagues’ standing and reputations. This is not to be confused with the role of a mentor: a mentor lends their perspective, while a sponsor gives opportunities.

An advocate is someone who publicly supports diversity, inclusion and under-represented groups. They use their power and influence to bring peers from underrepresented groups into exclusive circles. The advocate recognises and addresses forms of structural racism, holding their peers accountable for including qualified colleagues of all sexes, races and ethnicities, abilities, ages, religions, and sexual orientations.

The scholar is a knowledge-seeker who actively seeks to learn as much as possible about the challenges and prejudices faced by colleagues from marginalised groups. Scholars do their own research to seek out the relevant information and seek to learn, unlearn and relearn what they know.

When an ally takes on the role of amplifier they work to ensure that marginalised voices are heard and respected. This type of allyship can take many forms but is focused on representation within communication. It has been recognised that ethnic minorities, women, and other underrepresented groups often experience their voices being ignored, spoken over, or interrupted.

An upstander is the opposite of a bystander and is someone who speaks out or intervenes on behalf and in support of someone when they see or hear something is wrong. These can be everyday microaggressions or micro-inequities. This person pushes back on offensive comments, banter, or jokes, even if no one within earshot might be offended or hurt. Passive silence can be tantamount to active complicity.

A champion acts similarly to a sponsor but does so in a more public setting. Champions willingly defer to colleagues from underrepresented groups in meetings and in visible, industry-wide events and conferences, sending meaningful messages to large audiences.

A confidant creates a safe space for members of underrepresented groups to express their fears, frustrations, needs and goals. Simply listening to their perspective and trusting that they’re being truthful creates a protective layer of support.

A Journey to Allyship 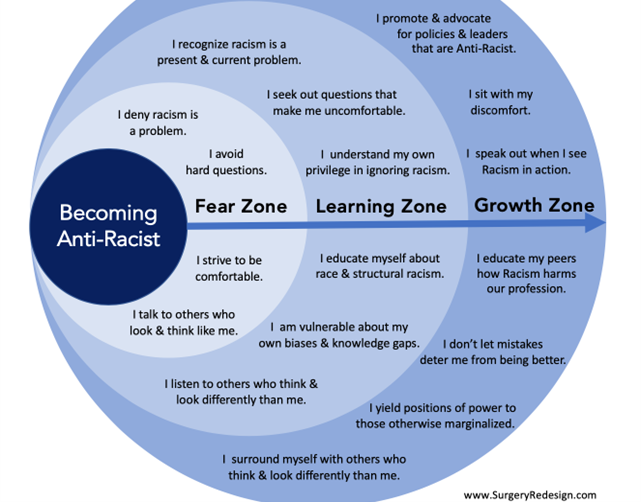 Becoming Anti-Racist is the process of moving from the Fear Zone to the Learning Zone and on to the Growth Zone.