A project which aims to plant the seeds of climate awareness and action through gardening is branching out across Glasgow high schools.

The University of Glasgow has recruited four high schools to the International Green Academy initiative, which partners pupils with University researchers and students to plan, develop and build green spaces on school grounds.

St Mungo’s Academy in Gallowgate and Lourdes Secondary in Cardonald are the latest schools to sign up to the Academy, following successful pilot projects at Drumchapel High and Boclair Academy which began in 2019 and have continued to flourish despite the challenges of COVID-19.

The International Green Academy, established in 2019 at the University of Glasgow, and inspired by the Community and School Garden Project at the University of Arizona, provides support for pupils to transform underdeveloped school land into gardens. In the process, the Academy aims to connect students more closely to their local environments, develop gardening skills, and help them understand environmental justice, sustainability, and food autonomy.

Dr Cheryl McGeachan, of the University of Glasgow’s School of Geographical and Earth Sciences, played a leading role in establishing the International Green Academy and setting up the Green Technician programme.

Dr McGeachan said: “Young people are increasingly anxious over the effects that climate change will have on the world they will inherit as adults, and how existing social inequalities could be amplified as access to resources narrows.

“We’re setting out to help young people understand that they can play an active role in developing a more sustainable community, and that garden-building can be part of addressing climate injustice. The vegetable garden currently under construction at Drumchapel High aims to become a regular source of fresh produce for local food banks, making a real difference to a community which has been hit hard by COVID-19. In creating a garden from scratch, pupils have seen for themselves that they can make valuable contributions to their school community and beyond with their work on the school garden.

“While we’ve not been able to have the Green Technicians work face-to-face with pupils as we’d hoped because of lockdowns and social distancing, the progress that pupils have made in creating green spaces has been remarkable. The Green Technician’s training enables them to become an important resource for schools, developing valuable connections between school and universities. We’re looking forward to expanding the programme across the city and other parts of the UK in the future.”

Pupils from Drumchapel High have been working with the International Green Academy team since spring last year. Many of the pupils who have participated have had difficulties with traditional classroom education, but have found helping to plan and build the garden a rewarding experience.

Ally Harris, a youth worker for Glasgow Life placed at Drumchapel High School, worked closely with Dr McGeachan to help pupils develop the school’s garden. He said: “Seeing the transformation of the site and the increased confidence levels of the pupils has made me, as a youth worker, very proud of the pupils. The success of the site has meant that many more pupils are wanting to become involved and I feel that the garden will be well maintained and become a massive part of our school’s future learning.”

Drumchapel High pupil John (age 16) helped to build the school’s garden. He said: “I have really enjoyed being a part of this and building the benches, plant beds and construction of the site has given me the confidence to recently help my uncle create his own garden project which I feel I would not have done without gaining the skills I did. Ally and Cheryl have also been brilliant with their encouragement every week and even when group numbers were low, we still had the motivation to make the site better every week”.

Steven Lamb, Faculty Head of Business Education, Enterprise and Home Economics at Drumchapel High School, helped to initiate the collaboration with the IGA.

He said: “It has been a genuine pleasure for Drumchapel High School to have worked in partnership with the International Green Academy's mission to empower young people.  Since September 2020 our young people, alongside the guidance of Cheryl, Ian and my colleague Ally Harris, have imagined and begun to collectively build a wonderful school garden that helps support and sustain an ecological future for the school and the surrounding community.

“There have been some stumbling blocks, there have been some moans and groans (it tends to rain quite frequently in Glasgow!), but the journey that our young people have been on, the skills that they have learned and the experiences they have been a part of over the last 9 months have been fantastic.  From digging up ground and handling worms, to constructing benches, it has been wonderful to witness the site transform into the area that it is now. Our young people should be immensely proud of themselves and I cannot thank Cheryl, Ian and Ally enough for giving them the opportunity to grow along with the garden.  Ally and I are so excited about what the future holds for this project and hope it can help create a legacy for our young people, and the community, that they can be proud of.” 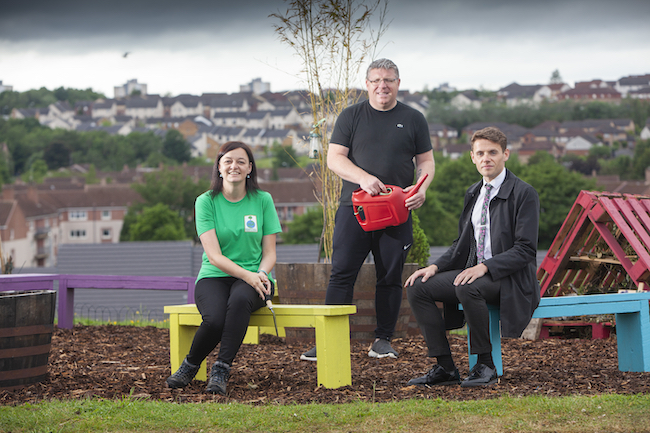 Dr Ian Shaw worked to establish the International Green Academy at the University of Glasgow before moving to the University of Leeds, which has also joined the Academy. Dr Shaw said: “Environmental justice and social justice are interlinked. We see in Glasgow and beyond the detrimental effect a lack of greenspace can have on young people’s mental and physical health. By building school gardens, our vision is to provide a space for lifelong skills, personal development, and community empowerment. And fun!”

The Green Technicians programme is supported by funding from the financial support from the British Academy and the University of Glasgow.