‘Kublai Khan does not necessarily believe everything Marco Polo says when he describes the cities visited on his expeditions, but the emperor of the Tartars does continue listening to the young Venetian with greater attention and curiosity than he shows any other messenger or explorer of his’. In 1271 the young Venetian Marco Polo began a 5600 mile journey across the land and maritime routes of the ‘silk roads’, which had connected the Eastern and Western ends of Eurasia since the times of the Han and Roman Empires, to the new capital of the Great Khan in Beijing. This description of the historic encounter is not taken from a thirteenth century source but rather is the opening line to the novel Invisible Cities (Le città invisibili) written by the Cuban born Italian novelist Italo Calvino in 1972. This novel imagines Polo describing to the Khan all the cities that he passed through on his journey from Venice to the Far East. Polo’s descriptions of the world express a sense of wonder, they are colourful, and often fanciful. After listening for a while, the Khan asks Polo why he does not describe his home city of Venice. Polo responds, ‘every time I describe a city I am saying something about Venice.’ This powerful line reminds that we can (or least could before covid-19) travel the world, but the way that we experience and interpret it will always, to some extent, be shaped by the lens of our prior experiences and pre-existing beliefs. Polo has dislocated himself from the Venetian context where he grew up, but as he travels across Persia and to the Far East, he encounters the world in relation to Venice.

Invisible Cities explores the relationships between memory, place, and desire. It examines how these relationships are transformed by travel (real or imagined) and the passing of time. The Khan experiences his own empire vicariously through Polo’s accounts of his cities as he lies in a hammock in his imperial palace in Beijing. ‘Does your journey take place only in the past?’, he asks Polo. Polo responds that what he described:

‘was always something lying ahead, and even if it was a matter of the past it was a past that changed gradually as he advanced on his journey, because the traveller’s past changes according to the route he has followed: not the immediate past, that is, to which each day that goes by adds a day, but the more remote past. Arriving at each new city, the traveller finds again a past of his that he did not know he had: the foreignness of what you no longer are or no longer possess lies in wait for you in foreign, unpossessed places’.

The process of journeying towards knowing something, be it a place or a historical event, will inevitably transform the meaning of the destination at which you arrive, and that meaning will keep changing.

Our main historical source for knowing the extraordinary journeys of Marco Polo is a manuscript that circulated in Europe from the start of the fourteenth century known as The Travels of Marco Polo (Il Milione, or Livre des Merveilles du Monde). This is based upon the stories that Polo recounted to his fellow prison inmate Rustichello da Pisa during their incarceration in Genoa. To the modern reader, this fourteenth century description of the world contains as many fanciful notions as Calvino’s rendering of this journey. Calvino’s Invisible Cities points to the invisible edges between reality and fiction, between memory and desire, and between the past and the present. Calvino’s odyssey is a reminder that people can travel and try to understand the world, but they will always arrive at the cross-roads of interpretation. 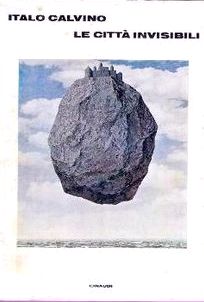 Marco Polo was not the first European to travel to the Far East, he was preceded by members of the socio-religious movement known as the Franciscan Order. The Franciscan Order was my gateway drug to global history (as well as the history of property rights and capitalism). I went on to write a book, The Franciscan Invention of the New World, which connected the histories of the Order’s early travel to the Far East with the story of their early expansion across Latin America. In my article ‘The Globalization of Franciscan Poverty’ I examine sources similar to The Travels of Marco Polo to explain how it was that the Franciscans were travelling the world but understanding it through the lens of their beliefs and experiences. Somewhere at the back of my mind, there is the door that Calvino’s Invisible Cities opened.

After my PhD, still hot on the trail of the global history of the Franciscan Order, I moved to Cambridge Massachusetts to take up a postdoctoral fellowship at Harvard’s Weatherhead Centre for Global History. A few days, before the programme started, I got caught in a rainstorm whilst wandering around Boston. I darted into a café and I pulled out a copy of Invisible Cities, packed because it was light, and I had always meant to re-read. Before I knew it, the whole day had passed, the sun had long come back out and was now fading, and I had once again become lost in Calvino’s imagined world. I later attended one of the first seminars on global history, wondering if I would fit into Harvard’s world of global history. The seminar leader, Charles Maier, opened the session with reference Calvino’s Invisible Cities, describing how Calvino imagines connection between places in the ‘spiderweb city’ of Octavia. My pursuit of the global history of the Franciscan Order had taken me across the Atlantic, but once again the world imagined by Calvino gave me coordinates to locate myself. The next year I took another transatlantic leap, this time moving to Florence to take up a fellowship at the European University Institute. This move took me closer not only to the Tuscan birthplace of the Franciscan Order, but also the home country of Calvino, and Polo’s beloved Venice. Like Calvino’s Polo, this journey did not bring me closer to any objective understanding but rather transformed what I was looking for and what it would mean. Now, with covid-19, our global travel is more restricted than Marco Polo’s, but works like Calvino remind us that we still have the power to remember and reimagine the past, present and future.

Italo Calvino’s work is classed as ‘fabulist’, a genre related to magical realism. If the Franciscans were my gateway drug to global history, Calvino was my gateway drug to magical realism, a literary genre important to the culture of Latin America. Through works such as Gabriel Garcia Marquez’s One Hundred Years of Solitude I encountered Colombia years before I had the opportunity to research there. Like Calvino’s fabulist genre, magical realism offers a gateway to a world in place and time are experienced in alternate ways. In this way, literature is important to certain understandings in global history as it teaches us that we must leave behind more familiar ways of knowing and orientating ourselves if we are able to encounter something different. The importance of the imaginative leap still drives my mode of inquiry. Today I have moved from Italian fabulist and Latin American magical realist literature and am interested in queer theory. I’ve just finished Cruising Utopia, the then and there of queer futurity. This genre teaches us that the act of imagining alternate words is not an idle armchair pursuit, but critically important to the urgent project of changing the world.

You may not be able to travel this summer, but through literature, history, and queer theory, you do have the power to imagine alternate worlds.