These two workshops have now been granted financial support from the Royal Society of Edinburgh, and have also attracted the interest of the Public Petitions Committee of the Scottish Parliament. We have undertaken to examine political petitioning from both a historical and a contemporary modern perspective, deliberately using modern political and social concepts to throw new light on a major historical issue: the origins of political petitioning, who used them for what purpose(s), and how early modern processes of petitioning relied on shared 'public' assumptions about social and political responsibilities and duties.

The creation of a lively and diverse political culture is an essential component of any democratic state, enhancing both the quality of civic participation in political life and a sense of identity and 'belonging'. Historians have pointed to early modern petitions, supplications and ‘gravamina’ as important vehicles for the expression of collective and plebeian voices. Aided by printing, petitions became part of a critical early modern shift towards more participative politics, comparable to present-day enhancements in engagement through online petitioning. Scholarship remains patchy, however. Two linked workshops for experts and postgraduate researchers would create a step-change in understanding not just the mechanics of public political communication, but also changes in the language of politics, concepts of community, and notions of legitimate popular political action in Scotland and its European neighbours over the period 1550-1795.

The first workshop examines normal petitioning practices and language in different contexts, while the second builds on this by demonstrating areas of innovation in political petitioning and political activism through case studies. Each workshop features at least five papers, with detailed discussion and a round-table summing up. The second workshop also will host a postgraduate poster session where doctoral researchers will share their findings with the aid of travel bursaries.

This workshop will investigate the diversity of petitioning in early modern Scotland, England and the German states. By examining petitioning forms and practices in a range of institutional contexts, we will identify late medieval legacies and early modern developments in practices and establish the cultural and practical context from which more participative and assertive petitioning practices could emerge. The schedule includes c.30 min for each paper followed by 15 min for questions. Fuller discussion will be pursued in the roundtable sessions after each panel.

This workshop will show how new methods of political petitioning developed in early modern Scotland and comparative countries, with particular emphasis on the growth of public engagement and participation.  Speakers will use case-studies to show how petitioning practices were reworked in episodes of political conflict in early modern Scotland and other polities, illustrating changes to the form, language, presentation and impact of petitioning.  Petitioning will be examined in relation to other forms of political engagement, such as elections, pamphleteering and newspapers, and their impact on public opinion and public sphace.  The workshop will be comparative and cross-cultural, drawing on forms of petitioning in Scotland, England, and other parts of Europe.  The effect of petitioning on social participation and the development of ideas about public opinion and the popular voice will be highlighted in discussion.  As before, comparisons and contrasts with the present-day will be made in exploring the contribution of petitioning to the development of a modern ‘public’ and notions of political representation and constitutional rights.

Last year Karin and Thomas organised a graduate student research-placement team to compile a provisional list of printed petitions as they appear in the ESTC (English Short Title Catalogue). A selection of key-words was used to identify printed texts up to 1730 which may in effect be a petition (ie. may have word(s) such as *petition, complaint, humble, representation, address, remonstrance, supplication, plea, protestation, grievance* in the title).  The list includes the earliest 16th-century printed petitions we could locate this way, and of course a great number from the civil war period.  This is very much work in progress, but we hope you may find the data of interest, given all the discussion of words and terminology we had at the last workshop.  As you will see, the chronological spread is (predictably) extremely uneven, as is the format and length of the petitions themselves. You can of course locate each text easily in the ESTC itself, by calling up the ESTC reference number given here. 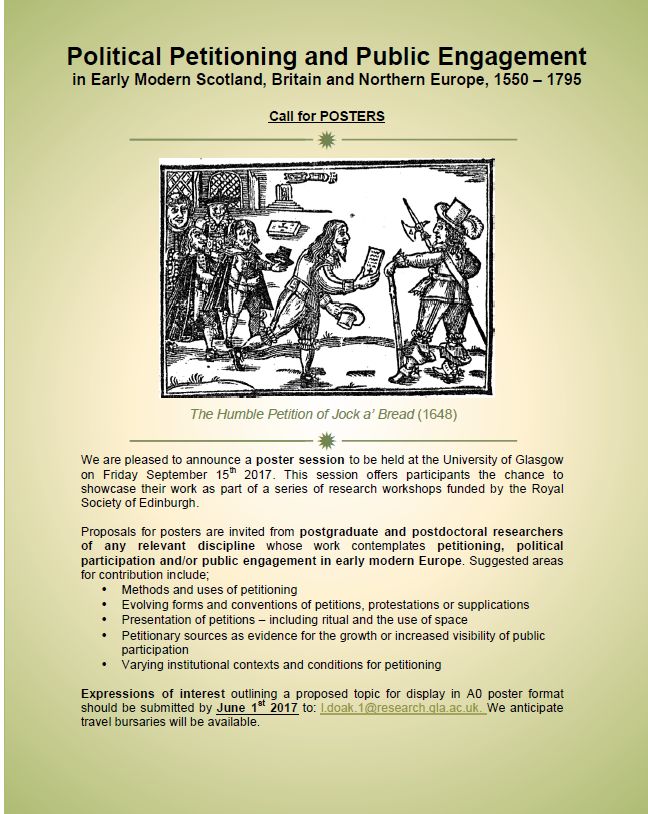 print from 1800, showing various people handing in petitions, in person, to the crown prince/regent in Copenhagen

print from 1800, showing various people handing in petitions, in person, to the crown prince/regent in Copenhagen