Symon’s Castle is a small timber and earthwork castle just outside Churchstoke in the Welsh Marches, dating to around AD 1231-1233. 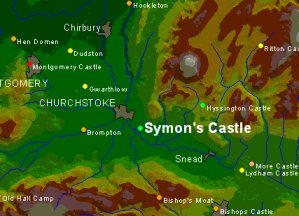 The Welsh threat in the Marches in the early thirteenth century led the two powerful Marcher lords – William Marshall the Elder, earl of Pembroke, and Hubert de Burgh, earl of Kent – to bring the young king Henry III to Montgomery on 30th September 1223 where they proposed an impregnable site for the new royal castle of Montgomery. Work started on its construction soon after and the castle gradually took form. The Welsh attacked the castle works on several occasions which caused Henry III to instruct all tenants in the lordship of Montgomery to strengthen the defences of their earthwork castles in 1225. Attacks on the unfinished castle continued in 1227, 1228 and again in 1231 when the new town around the castle was burnt.

Henry appears to have decided to take further action, and, cutting through the duties and obligations of the Hundred Courts, he issued a mandate in 1231 to the Sheriff of Wiltshire excusing a knight called Simon de Parco from service in the county and hundred courts until the quindene of Michaelmas. On the king’s orders, Simon de Parco garrisoned the castle of Sneth, situated a few miles from Montgomery, in 1231. In 1233 it appears that the main portion of Montgomery castle was completed and Henry handed the Honour of Montgomery to William de Boeles along with all related property, including the castle of Sneth. The castle of Sneth then disappears from the historical record – and if we can assume that Simon de Parco’s garrisoning of the castle was the first time it was occupied, then the lifetime of this castle might be as little as two years.

Jack Spurgeon was the first to discuss at length the identification and location of the king’s castle of Sneth. The problem is that within the parish of Snead (or Sneth) there are no castles, although two lie within the Forest of Snead: Symon’s Castle (a few hundred metres to the west of the parish boundary) and Castle Hill, Hyssington (about 1km beyond the parish). There is obviously a temptation to equate Symon’s Castle with the castle garrisoned by Simon de Parco on the basis of the name – it seems too much of a coincidence for there to be a “Simon” in the king’s castle of Sneth and for there to be a castle called Symon’s Castle in the Forest of Snead. The Forest of Snead was a source of lime and timber for the construction of Montgomery Castle, and Symon’s Castle, situated beside the medieval road, might therefore be related to protection of an important strategic supply route. 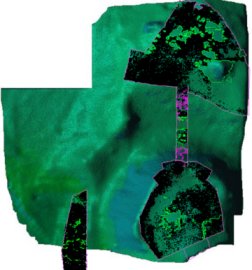 A ten year period saw the total excavation of both the bailey and motte areas. Apart from the castle defences, which around the motte consisted of a stone-faced clay rampart which is still visible, the structural evidence was extremely slight, with very few earth-fast timbers. The soil was extremely shallow and degraded, with any colour differences leached out unless the soil was burnt. Apart from one or two areas, this meant that it was impossible to define archaeological contexts on any basis other than the relative density, distribution, and nature of the weathered and freshly broken stone that made up much of the soil matrix. Excavation proceeded in arbitrary spits, recorded in detailed stone plans at each level which can be overlaid to reconstruct what was removed. Based upon the methodology developed by Phil Barker and Bob Higham at Hen Domen, ‘blank’ areas and areas with differing densities of stone could be identified as the location of posts and other features. The exception on the motte was in the area of the entrance through the rampart there was a clearly distinguishable dry stone revetment wall and behind it the timber slots for a substantial timber building, interpreted as a tower. 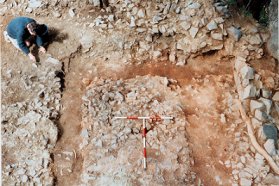 In the absence of clearly definable contexts, the distribution of artefacts assumed critical importance – especially as many of them were derived from structures themselves. Structures and activity areas etc. were identified primarily on the basis of three-dimensionally recorded artefacts – over 10,000 on the motte alone. Some 3000 of these artefacts are fragments of burnt daub, many of which bear the impressions of wood grain on their flat surfaces, and a number of fragments are characterised by several flat surfaces, either stepped or at right angles to each other. These are interpreted as being derived from horizontally planked timber framed structures which were caulked with daub. In addition, nearly 700 nails of a variety of shapes and forms were recovered, most associated with fastening planking. Around 1200 fragments of lead were found, mostly tiny droplets of molten lead but also small fragments of lead sheet and one or two large "splats". There were over 500 pieces of medieval pottery – in a number of cases, pots discovered where they had been dropped and broken, plus the usual smattering of less common items: some loose change, some buckles and some ironwork, including knife blades and arrowheads, for example. 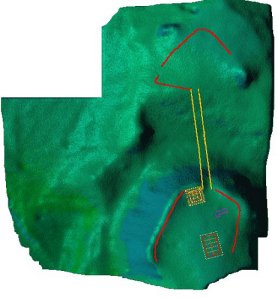 The concentration of clay daub with surfaces seems likely to represent the location of a large timber structure with no earth-fast posts. Nails are associated with this structure and also appear to be related to a structure beside the end of the a bridge at the entrance to the motte. Lead was concentrated outside the large timber building and within the structure beside the entrance, presumably representing roofing material melted in the fire. A pottery dump was located outside the large building, and single dropped pots elsewhere on the motte, particularly in the cooking area and in the entrance to the structure beside the entrance. Combining the artefact and limited structural evidence, we can begin to draw some conclusions about the layout of the site. The motte had a stone revetment retaining the clay rampart and a timber tower of quite substantial build which was faced by the stone revetment wall. The buildings were timber framed, with horizontal overlapping planking. A roadway was identifiable at either end of the bridge, and bridge timbers with planking extended onto the motte. The bailey was seemingly little more than a bridgehead, with much slighter defences consisting of a timber palisade, with a gateway and metalled road surface but no internal structures.

There is a paradoxical feel to the evidence – a mixture of permanence and impermanence. Most of the evidence is very slight, giving the impression of quite temporary palisade and timber buildings, but there is also the stone revetment wall and the substantial timber tower. The site is also largely undisturbed – pots were left where they fell, suggesting it was never in use for long. Of course, the instructions given when the castle was built are not known, so it may be that a rapidly-built  defensive structure was thrown up which then began to be replaced or reinforced before the castle was unexpectedly abandoned. The entire castle was comprehensively destroyed by fire, likely as a means of slighting the castle since there is no evidence of attack. The site was never used again other than as (very) rough pasture.

The excavations at Symon's Castle were jointly directed by Chris Arnold and Jeremy Huggett. The landowners, Alex and Vera Wilkinson, kindly provided access and facilities. Over 500 volunteers and students contributed to the project and particular thanks are due to the various supervisors during that time: Jo Lawson, Sarah Fletcher, Jon Kenny, and Hugh Willmott.

More detailed discussion and information about the modelling methodology used can be found at: J. Huggett and Chen Guo-Yuan (2000) "3D Interpretative Modelling of Archaeological Sites/A Computer Reconstruction of a Medieval Timber and Earthwork Castle" Internet Archaeology 8