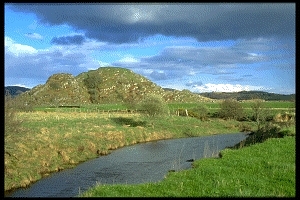 Dunadd is one of the most significant archaeological sites in Scotland, and one of the most important early medieval sites in Britain. It is located in the Kilmartin Valley, Argyll, Scotland. The site is a fortified hilltop, important as a royal centre of the early Scots in the kingdom of Dal Riata. The site was excavated in 1980-81 by Dr Alan Lane of the Department of Archaeology, University of Cardiff.

This site gives access to the excavation archive associated with the published volume.

Dunadd (NR 836936) is a craggy rock situated at a constriction of the main peninsular part of Argyll, with the district of Knapdale lying to the south and Mid-Argyll to the north. It lies within the Crinan Moss (Gaelic Moine Mhor), a flat lying area much of which is covered in peat bog. The site is 4 km from the sea at Loch Crinan, a large bay which opens onto the Sound of Jura. The River Add, a substantial river, meanders round the north and east of the site and frequently floods the adjacent river terraces. There is a dense concentration of prehistoric burial monuments in the area, which is generally referred to as the Kilmartin Valley.

In 1904 David Christison published the first detailed description and illustrations of Dunadd. This was part of a general survey of the forts of Argyll and a follow up to the seminal analysis of forts contained in his Rhind Lectures for 1894 - Early Fortifications in Scotland (Christison 1898). Christison was a distinguished scholar and fieldworker as well as secretary to the Society of Antiquaries of Scotland and his survey work at Dunadd is an important early source of information. From Christison's description of the site prior to excavation it appears that only the defences of summit enclosure and the lower enclosure were then visible. His sketches, if reliable, also show walling in areas whether little or nothing now survives (Christison 1904, 224-34).

The following year Christison published a report of excavations on four of the forts on the Poltalloch estate including Dunadd (Christison and Anderson 1905). The work was carried out from May 1904 to January 1905 under the direction of Alexander MacKie, an experienced Clerk of Works of the Society of Antiquaries of Scotland. The excavation report was written by Christison, based on Mackie's notes and a weekly letter he sent to Edinburgh; on plans prepared by Thomas Ross, the eminent architectural historian; and on MacKie's photographs. Christison did not however visit the site during the excavation because 'the great distance of the locality precluded superintendence, in our usual manner, by regular visits from Edinburgh ' (Christison and Anderson 1905, 259).

According to J.H. Craw the excavation team consisted of four men who were at work at Dunadd for perhaps 14 weeks from October to January (Craw 1930, 12-3), but apart from the evidence of Ross's plan there is little clear evidence of the extent of the work undertaken on the site. It seems however that the work, presumably with pick and shovel, consisted of following walls and clearing wall faces, and turning-over the interior to look for artefacts and traces of stone buildings.

The second major excavation of Dunadd was undertaken in 1929 under the direction of J.H. Craw, then Secretary to the Society of Antiquaries of Scotland. The purpose seems to have been to establish a stratigraphy for the site and clarify problems of dating left by Christison's excavation. The work was undertaken from late May till early July and in all 24 days were spent on the site, the excavation being done by two local men (Craw 1930, 113). When the weather was too wet to permit sieving (sic) of the soil Craw transferred his team to various prehistoric sites in the Kilmartin Valley just north of Dunadd.

Craw's work was quite restricted and seems to have been aimed at examining a number of different areas. Firstly he dug out the triangular end of the summit fort (A) in a cutting labelled X. This was dug in a series of four 9 inch (25 cm) spits which exposed bedrock in at least some of the trench. Few relics apart from animal bones were found. A second area Y was dug just to the north-west of fort B where a natural gully drops down from the edge of the rampart. This was selected because dense nettle growth indicated that it probably contained a midden. This was dug in three sections from the bottom up. The deposits consisted of turf and stone wall-debris 18 inches (45 cm) deep, then two 9 inch (25 cm) spits of artefact-rich soil with denser charcoal at the base and finally a natural light coloured subsoil. No stratigraphy was observed in the middle artefact-bearing soil nor any differentiation in the artefacts from upper or lower spits (Craw 1930, 114-5).

Finally Craw dug a third area, Z, 24 x 15 feet (8 m x 5 m) in fort D, the middle enclosure. Again nettle growth, described as the strongest in the fort was the decisive factor in site selection. Craw observed that this deposit, dug in four layers of 9 inches (25 cm), had the most artefacts of any area but no sign of stratification was recognised. He suggested that the ground had been turned over in 1904-5 and noted the proximity of two fragments of samian ware to an Eley cartridge case 'on the top level' (1930, 115).

Craw concluded that many more artefacts might be recovered from Dunadd in further excavation, and that work in fort D in particular would be productive, but he thought that little hope of stratification remained and consequently doubted that any further work was justified. However, Craw did recover a quite considerable assemblage of metal, glass, stone, clay and pottery artefacts including many more mould fragments and sherds of wheelmade pottery than in 1904-1905. Unfortunately, because of the supposed lack of stratigraphy Craw did not label any of the finds and therefore paradoxically we know even less about the provenances of the 1929 finds than those from 1904/5. We know only that area Z produced most of the moulds, a feature confirmed by the 1980-1 excavations. Craw noted evidence of early prehistoric finds but argued for occupation in the Early Iron Age, Roman period, and in the sixth to ninth centuries AD (1930, 125-6). An important step was Craw's realisation that the moulds and the pottery (subsequently E ware) from Dunadd were of a similar nature to those from the Mote of Mark (ibid.). Illustrations of many of the finds were published.

The 1980-1 excavations had a deliberately restricted remit, defined by the Inspectorate of Ancient Monuments. Their primary purpose was to establish dating criteria for the defences of the site, which was a key site in the debate on the date of 'nuclear forts', with a secondary purpose of indicating if there were areas undisturbed by the previous excavations. The site was investigated during Professor Leslie Alcock's campaign of small-scale excavation of a number of historically documented early medieval Scottish sites in the late 1970s and early 1980s (e.g. Alcock & Alcock 1987).

Four small trenches were excavated in an attempt to date the different defensive lines of the fort.

Site 1 was situated on the summit dun (Enclosure A) and measured approx. 8 x 9m. A complicated sequence of deposits and rebuilt ramparts were found.

Site 2 was situated across the rampart of the outer wall (Enclosure E/F) and measured 6 x 10m. Few occupation deposits were encountered here.

Site 3 cut across the demolished rampart of lower or plateau fort (Enclosure D) and measured 12.5 x 6m. This was the only trench to cut through substantial occupation deposits, which turned out to be the build up from a very important fine metalworking workshop of the seventh century AD.

Site 4 was laid out across an outer line of boulders, low down on the hillside, which had been suggested to be an outer rampart. This measured 9 x 1.5m, and found no evidence that this was a rampart.

D
The building of other enclosure walls thus creating a nuclear fort, perhaps in the 6/7th century AD

G
Subsequent use of the site, including royal proclamations in 1506, up to the 20th century.

A sequence of dates for the fortifications have been obtained, showing the development of the site from a middle and later iron age summit dun to an early medieval multi-ramparted 'nuclear fort'. The reached its greatest extent in the 8/9th centuries AD, and declined rapidly thereafter. However it still retained some symbolic significance until as late as 1506 when it was used for royal proclaimations.

A major metalworking workshop of the 7th century AD was uncovered on Site 3. This provided evidence for the working of gold, silver, copper alloys, lead, iron, leather, wood and stone. Large numbers of crucible and mould fragments for penannular brooches and other objects enabled reconstruction of casting technology using scientific and other analyses. They also provide valuable dating evidence for the typological sequence of brooches, and the development of large panelled annular brooches of the Hunterston/Tara type, and showed that these were being manufactured in Dal Riata at an early period. Some brooches show clear signs of adaption from Anglo-Saxon types, and it is possible to see Dunadd as one of the key sites in the development of the Insular Art Style of the great illuminated manuscripts such as the Book of Kells.

Other important artefacts included a motif piece with animal and interlace decoration, probably of the 10th century AD; a range of glass beads; a cache of querns of distinctive early medieval type; Anglo-Saxon metalwork including a gold and garnet stud; a gold and glass tessera from the Mediterranean; and an escutcheon from a hanging bowl.

Trading links were shown by imported pottery and glass from France, and other materials from a wide variety of sources including the Mediterranean. These show that Dunadd was an important redistribution centre for luxury commodities, and that this trade was under royal control.

The evidence for inauguration of the kings of Dal Riata on the site is strengthened by these findings, and an important appendix describes a new reading of the enigmatic ogham inscription beside the inauguration footprint. This suggests that the inscription was written in Old Gaelic, rather than Pictish, as had been assumed previously.

CAMPBELL, E 1987 A cross-marked quern from Dunadd and other evidence for relations between Dunadd and Iona. Proc Soc Ant Scot 117, 59-71.

BANNERMAN, J 1974 Studies in the History of Dalriada. Edinburgh.

CAMPBELL E 1999 Saints and Sea-kings: the first kingdom of the Scots Historic Scotland/Cannongate