In the months following the excavation the fragile contents of the cist were conserved and examined by a team of specialists from across the UK. At this stage the findings are provisional, but the range of objects accompanying this special Bronze Age burial is becoming clear.

Two copper alloy objects were found in the southeastern end of the cist. These were a flat dagger and a smaller knife – the latter of which appears to have been broken prior to deposition. The large dagger has provisionally been interpreted as of the Butterwick type (2200-2000BC). The blade is composed of copper alloy and a ribbed gold band curves around the hilt.  The hilt and pommel appear to be composed of a range of organic materials (such as antler/horn, bone and wood used (as well as the gold and rivets), but the identification of some of these elements are undergoing further tests for confirmation. The dagger appears to have had at least two layers of coverings over the blade. Traces of a sheath composed of animal skin were identified adhering to the dagger blade. 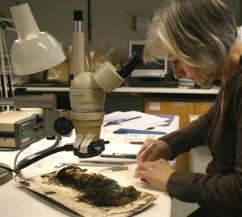 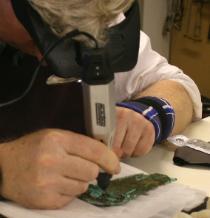 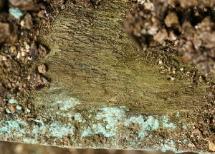 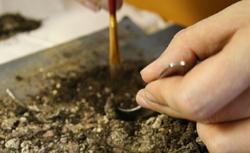 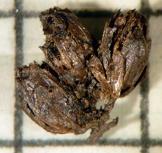 Due to peculiar atmospheric and chemical conditions within the cist, there has been some remarkable organic preservation. Although no human bones or teeth remained intact, fragments of two wooden vessels were present alongside a discrete deposit of plant remains lying under a layer of animal hide, which may be the remnants of a leather bag. Initial analysis of the plant material indicates that it was composed largely of meadowsweet flowers (Filipendula ulmaria) - the first conclusive discovery of flowers within a Bronze Age burial in Britain.

Found with the flowers was a distinct collection of items including a piece of limonite and a large flint flake or strike-a-light.  These materials may have been part of a fire-starting kit. Birch bark, and other organics found nearby, could have been the tinder for such a kit.

The combination and variety of the grave goods -including a dagger and a knife, the location within a large henge, as well as the rock-art on the capstone are all indications that the individual buried within this cist was socially, politically or ideologically significant to the Bronze Age community of Forteviot.