Exploring the environs of Roman forts along the Antonine Wall

As part of the very recent and successful bid to UNESCO’s World Heritage Committee to grant the Antonine Wall World Heritage Site status, much effort was devoted to updating and expanding our understanding of Rome’s northernmost frontier.  The Department together with GSB Prospection Ltd contributed in the form of geophysical survey within and especially the environs of forts along the Wall with the aim of locating a range of targets from the Military Way,  the Wall and Ditch to the apparently elusive civilian settlements.  The surveys were carried out on behalf of Historic Scotland for the Culture 2000 Frontiers of the Roman Empire Project between 2005 and 2007.

The forts investigated by Glasgow were Balmuildy, Auchendavy, Westerwood, Bar Hill, Castlecary and Carriden (Fig. 1), using mainly magnetometry but also resistivity, magnetic susceptibility and ground-penetrating radar. Although several of these fort interiors are well known from early twentieth century excavations, only limited invasive work has been conducted within the interiors of Auchendavy and Westerwood, while invasive work at Carriden to date has been restricted to initial trenching to prove the CUCAP crop marks and recent work focused on the newly discovered bathhouse. The immediate environs of the forts have received very little invasive investigation.

Fig. 1. The locations of the forts investigated along the Antonine Wall (from Breeze 2004).

Some good results were obtained within the forts themselves, for instance at Balmuildy (Fig. 2), where some new points of details regarding the fort defences were identified. Magnetic survey was capable of detecting the Ditch associated with the Wall at all the forts except Carriden, where an unsuccessful attempt was also made to locate a continuation of the line of the frontier emplacements past Bridgeness. Fig. 3 shows the case at Auchendavy. 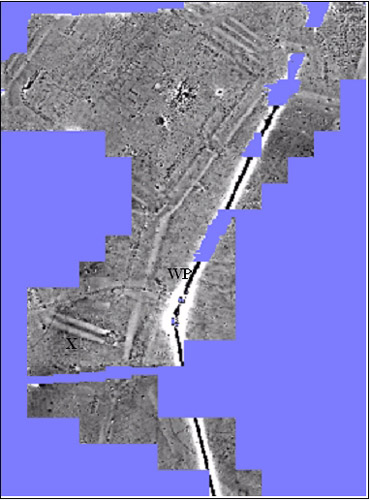 Fig. 2. Grey-scale graphic of the magnetic survey at Balmuildy. At the top is the fort;  WP is a modern water pipe. 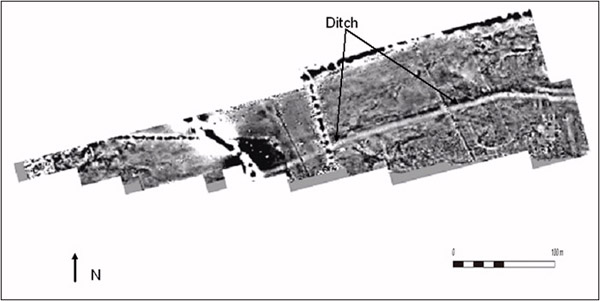 Fig. 3. Grey-scale graphic of the magnetic survey at Auchendavy, showing the Ditch of the Antonine Wall.  The fort lies just outside the graphic to the east.

In the area immediately to the east of the fort at Castlecary the survey detected intriguing traces of what could have been the Roman civilian settlement (possibly, but at least some of it is inside the annexe, which is thus unlikely to be settlement); those traces suggest a much less permanent form of settlement than the equivalent on Hadrian’s Wall. The same remarks apply to Carriden, where the results of survey were dominated by the remarkable field system of Medieval or post-Medieval date (Fig. 4). Ground-penetrating radar successfully detected what looks like a bath house to the immediate NW of the fort at Auchendavy (Fig. 5). 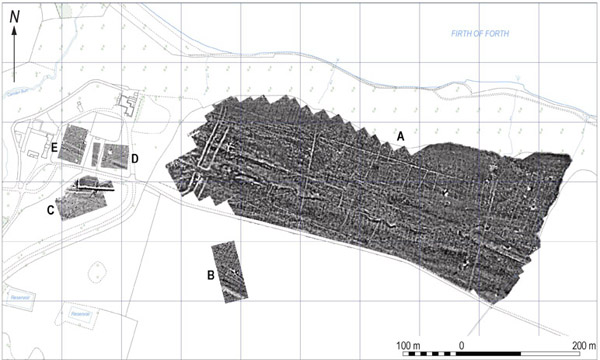 Fig. 4. Grey-scale graphic of the magnetic survey at Carriden. The ditch system of the fort can be seen at the western end of the large surveyed area in which the (post-) Medieval field system can be seen. 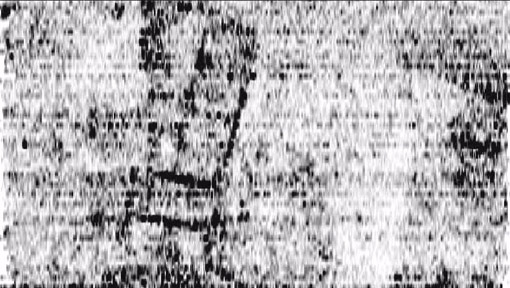 Richard Jones, Chris Nelson and John Malcolm with the help of many students undertook the surveys, Dr Alan Leslie (GUARD) provided archaeological input, and Professor David Breeze commissioned and encouraged the work. The results of the surveys will be published in due course, but Stephens, Jones and Gater (2008) have written a summary. The project has stimulated further application of large area  geophysical survey at Roman sites elsewhere in Scotland, for example at Burnswark in Annandale as part of the Department’s new Solway Hinterland Archaeological Research Project led by John Malcolm, Oliver O’Grady and Richard Jones.

Breeze, D.J. 2004. The Antonine Wall: the North-west frontier of the Roman Empire. Edinburgh.