Joanna Tucker (MLitt, Scottish and Celtic Studies, 2013) was awarded the first First Marquis of Montrose Award for Scottish Studies, and was presented with her prize by the Duke of Montrose. Alongside her here in the photograph is (of course) her proud supervisor, Prof Dauvit Broun. This award will, for at least the next five years, be awarded to the Masters student who scores the highest mark in a dissertation in the field of Scottish studies (broadly defined). 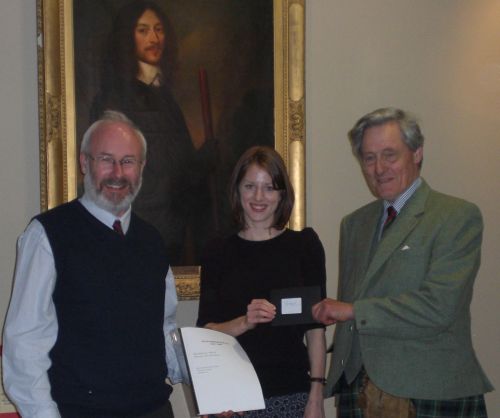 The funds for this award were generated by a formal dinner held at the Buchanan Castle Estate during which staff (past and present) from Scottish History and Scottish Literature (with the help of the Duke's factor, Ms Janet Dawson, and the MC expertise of Alison Walker (BBC)) entertained and educated the guests with speeches about the first marquis' historical and literary significance and songs frm the seventeenth century.

Joanna commences her PhD studies (funded by the AHRC) in October.