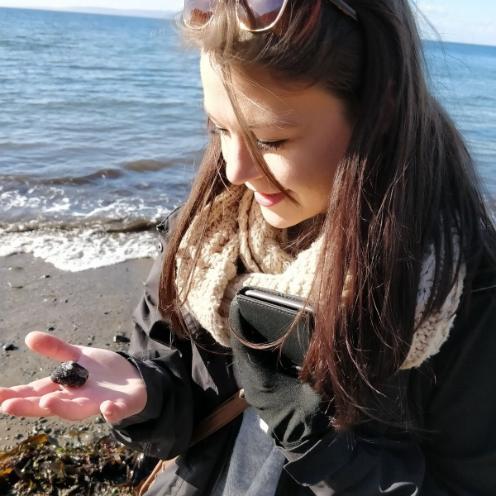 I was born in Romania and in high school I had two great Geography teachers who encouraged me to participate in regional and national contests. Moving to Glasgow for my undergraduate studies, I graduated with a degree in Earth Science. During my undergraduate degree I became interested in sedimentary rocks, fossils and in past climate reconstructions. I’ve studied through small projects bivalves, echinoderms and forams.

I’ve done an MSc by Research with the BECS group during which I’ve looked at a variety of biomarkers extracted from recently discovered Amazonian peatland samples. The investigated biomarkers mirrored and complemented existing records of two local environments and were thus applied to a third peatland. I have also focused on methanotroph- and methanogen-related biomarkers, trying to predict the relative changes in these microbial communities and past methane relative production potentials of the three peatlands. Some of the biomarkers included in this investigation were: hopanoids (diploptene, diplopterol, other hopanes), fatty acids characteristics of bacteria with 16 and 18 carbons and GDGTs.

As a current PhD student, I am co-supervised by Dr Caroline Gauchotte-Lindsay (HiRACE group) and Professor Jaime L. Toney (BECS group) on an IAPETUS DTP funded project entitled “Novel stable isotope and biomarker approaches to measuring methane emission in peat bogs”. I am primarily based in the Environmental Engineering department where I am working on the development of a prep-GC system aimed for position/part-specific isotope analysis (PSIA). The PhD targets methanotroph lipids from lab-grown cultures and biomarker issues related to environmental samples (co-elution, low concentrations, diluted isotopic signatures due to mixing biomarker pools). We are hoping that, through pyrolysis and stable isotope analysis of targeted molecules and fragments, to be able to assess with higher confidence periods of relatively high and low methane consumption in past environments.