"The Making of The University of California Book of North African Literature or: How to Put 2500 years of Maghrebian Literature into One Book." 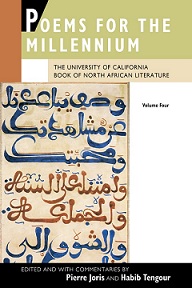 They will speak to the conceptual origins and structural framework of the book, to the range of materials included beyond poetry proper, to translation and editorial matters, and to the coincidence of this work with the historical moment now known as the “Arab Spring.” All these are questions of some complexity, given North Africa’s — the Maghreb’s — multicultural and multilingual historical span covering two and a half millennia, while extending geographically from the Siwa oasis to the Atlantic Ocean, and from al-Andalus to Mauritania.
It is the authors’ contention that knowledge of and familiarity with the Maghreb and its complex cultural matrixes will prove essential in a world in which a nomadic mindset is crucial for a possible understanding (or invention)
of this new century.

This theoretical presentation is leavened by readings of poems & texts in translation with readings in the original languages — Arabic, French & Berber — & in translation, and by visual and sound materials, in a multimedia presentation created by Nicole Peyrafitte.

Pierre Joris has moved between the US, Europe & North Africa for 45 years, publishing over 40 books of poetry, essays and translations. Coming in early 2013 are Meditations on the Stations of Mansur al-Hallaj (poems) from Chax Press & Barzakh (Poems 2000-2012) from Black Widow Press.
Just out from UCP is The University of California Book of North African Literature (vol. 4 in the Poems for the Millennium series), coedited with Habib Tengour. Exile is My Trade: A Habib Tengour Reader edited, introduced & translated by Pierre Joris (Black Widow Press) came out in early 2012 as did Pierre Joris: Cartographies of the In-between, a collection of essays on Joris’ work, edited by Peter Cockelbergh (Litteraria Pragensia, Charles University, Prague, 2011). The Collected Later Poems of Paul Celan, translated & annotated by Pierre Joris, is scheduled for early 2014 from Farrar, Strauss & Giroux. Other recent books include The Meridian: Final Version—Drafts—Materials by Paul Celan (Stanford U.P. 2011), Justifying the Margins: Essays 1990-2006 (Salt Books) and Lightduress by Paul Celan which received the 2005 PEN Poetry Translation Award. With Jerome Rothenberg he edited Poems for the Millennium, vol. 1 & 2: The University of California Book of Modern & Postmodern Poetry. Professor of poetry & poetics at the State University of New York, Albany, he lives in Bay Ridge, Brooklyn with with his wife, collaborator & producer, multimedia artist Nicole Peyrafitte.

Habib Tengour, poet and anthropologist, born 1947 in Mostaganem (Algeria), lives and works between Constantine & Paris. Considered as one of the Maghreb’s most forceful and visionary poetic voices of the post-colonial era, Tengour, who authored a “Manifesto of Maghrebian Surrealism” in 1981, explores the Algerian cultural space in all its ramifications — the oral & hagiographic traditions, the popular imagination & the founding myths, collective memory, raï music & the lived experiences of exile — in some 8 books of prose & 12 collections of poetry to date. He also translates from English (P. Joris) & from Arabic (Saadi Youssef, Chawki Abdelamir) & co-edited the anthology Poems for the Millennium, volume 4: The University of California Book of North African Literature, in collaboration with Pierre Joris.