Led by Professor David Manlove, and dating back to research first deployed by the NHS in 2008, bespoke algorithms developed by UofG continue to increase the number of kidney transplants arranged through the UK Living Kidney Sharing Scheme (UKLKSS).

Since August 2013, 316 additional transplants have taken place, a 44% increase over the number of transplants that would have been identified using previous algorithms. The new UofG algorithms, optimised to the unique requirements of the UKLKSS, allow NHS Blood and Transplant to match recipients requiring a kidney transplant, who have a willing but incompatible donor, with the donor of another recipient in a similar position. The improved functionality of the algorithms has increased transplant numbers and freed many more kidney patients and their families from the burden of long-term dialysis. This has saved the NHS a minimum of GBP76.2 million between 2013–2030 based on current transplant numbers.

Each year, 64,000 UK patients are treated for end-stage renal failure, 30,000 of whom are on dialysis, with kidney failure having a devastating impact on patients’ lives. Transplantation is the most effective treatment for end-stage renal failure; the life expectancy of transplant recipients is doubled or tripled compared to those remaining on dialysis. Globally, the demand for available kidneys has consistently exceeded supply. Increasing kidney availability is critical for improving the outcomes of prospective and current renal transplant candidates.

“The collaboration between NHSBT and the University of Glasgow in developing the UKLKSS has continued to progress over the last seven years. Most recently it has enabled the algorithm for living kidney exchanges to include ‘long altruistic donor chains’… an important new development, allowing 273 additional kidney transplants to date (Dec 2020), with many more expected in future years. Within the scheme, long chains now represent about 25% of transplant activity and enable many recipients who are very difficult to match (highly sensitised) to get a transplant. The possibilities afforded by the scheme are life changing for the many recipients who benefit".
Assistant Director of Statistics and Clinical Studies at NHSBT.

Our researchers have shown how to model a complex, hierarchical set of criteria that define an optimal set of kidney exchanges. Their algorithms have enabled the UKLKSS to optimise the number of potential donor-recipient matches by including three-way exchanges from July 2008; short chains from January 2012; and long chains from April 2015. In 2018, a change in NHSBT policy, which led to chain donation becoming the default option for altruistic donors, resulted in refined algorithms being used which further increased matching rates. 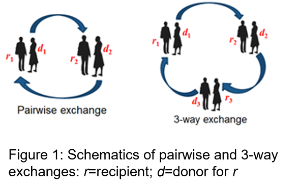 Between 1 August 2013–31 December 2020, 1,652 potential transplants have been identified by these algorithms (1,420 of which stem from three-way exchanges and altruistic donor chains), from which 1,031 transplants were performed. Had NHSBT continued to use their previous algorithm from 2007, we estimate that only 715 transplants would have taken place (from a total of 1,146 identified matches, using the same conversion rate). This represents an increase of 316 transplants (or 44%) in this period, compared to the estimated number had the earlier NHBST algorithm continued to be used.

“The UK has developed the largest living kidney sharing scheme (UKLKSS) in Europe in terms of the number of transplants achieved and the proportion of registered recipients receiving a transplant through the scheme. It is recognised as an exemplar in terms of innovation and complexity. The scheme particularly benefits long-waiting recipients with immunological complexity and recipients from Black and Asian communities. The effectiveness of the UKLKSS is significantly enhanced by the inclusion of non-directed altruistic kidney donors, who are willing to donate to anyone in need of a transplant and can initiate a chain of up to three transplants by a single donation. The UKLKSS currently contributes up to 20% of total LDKT (Living Donor Kidney Transplantation) activity”.
Living Donor Kidney Transplantation (LDKT) Position Paper, August 2017.

The benefits of this research are numerous. Transplanted kidneys obtained from living donors last on average 25% longer than those from deceased donors (15 years compared to 12) so increasing the number of these types of exchanges translates into more patients living for longer with a healthy kidney and resuming normal, working lives. By comparison, the life expectancy of patients on dialysis is around 5 years. Such quality-of-life benefits for UKLKSS recipients have been described in NHSBT recipient stories and in three television documentaries. Transplants facilitated by the UofG algorithm also improve the quality of life of those who donate to the UKLKSS.

In addition to improving donors’ and recipients’ quality of life, the work of Professor Manlove and his team also provides economic benefits to the NHS. Each kidney transplant saves the NHS GBP241,000 over 10 years (the median graft survival time, compared to the cost of dialysis over that time period, and taking into account the cost of the operation itself). Thus, by enabling 316 more kidney transplants from 2013–2020, the UofG researchers have potentially saved the NHS around GBP76.2 million in total from 2013–2030, with additional savings to come with each new matching run.

Transnationally, the ENCKEP project, funded by the EU COST framework, brings together policy-makers, clinicians, economists, social scientists and optimisation experts from across Europe to share best practice in the establishment of national and transnational KEPs. Chaired by Professor Manlove, it has resulted in a series of handbooks and strategy papers addressing policy, clinical practice and evidence, and optimisation criteria critical for improving the quality of life of a growing European patient population with end-stage renal disease. Corroborating details outlining how the outputs of UofG research, contributing to the ENCKEP COST Action, have helped to shape transnational KEPs including STEP.