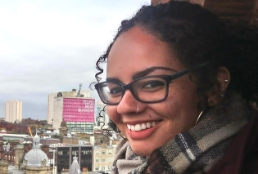 Georgia Kirby is a DTP PhD student looking into Wolbachia infections in avian malaria vectors. Having started out in International Relations she has come quite a long way working in both a refugee health department and a biocontrol company gaining a passion for vector control in malaria infection…

Can you tell us a little bit about your background?
I originally studied German and International Relations as an undergraduate, before I realised my true calling was science! I did a degree in Biological Sciences at the University of Warwick and by my final year I was really interested in insects and the various humanitarian applications of entomology. After graduating in 2016 I worked in the health department of a refugee centre, where many of the clients came from malaria-endemic countries and I began to fully recognise just how much of a burden vector-borne diseases are. Following that I worked at a biocontrol company, optimising insect and predatory mite systems for use on arthropod pests of crops. I started at Glasgow in 2017 as an MVLS DTP student, so I did two 12 week rotations in different labs before formally starting my PhD project in April 2018.

What is the focus of your research and why is it important?
My research is on the endosymbiotic interactions and ecology of vectors of parasitic disease and I’m focusing on natural Wolbachia infections in avian malaria vectors; I’m particularly interested in how native Wolbachia interacts with parasites to affect disease transmission and the impact of Wolbachia on vector longevity and fecundity. At the moment I’m looking at Wolbachia infections in blackflies and the association between Wolbachia and Leucocytozoon. Leucocytozoon is a haemosporidian parasite similar to Plasmodium and is a common causative agent of avian malaria. I hope that this system can be used as a model to better understand some of the effects of native Wolbachia in vectors of parasitic disease, and ultimately shed some more light on whether and how Wolbachia can be used as a form of vector control for malaria.

What has been the most positive aspect so far?
I’ve been lucky enough to have already had a good range of experiences and opportunities – lab work, fieldwork and a workshop in California. My supervisors are really supportive too.

What has been the most challenging aspect so far?
Figuring out my research questions has been difficult – I’m interested in a lot of different things, and trying to amalgamate them to form a focused and cohesive topic is a struggle!

Tell us about your plans for the future
Right now the aim is to finish my PhD! But I would like to continue to research methods of vector control in the long-term.

Georgia Kirby will be presenting her work on Friday 01 March at 4pm in the Graham Kerr LT1. Her talk is entitled 'Endosymbiont-parasite interactions in avian malaria vectors'. Come along to find out more.