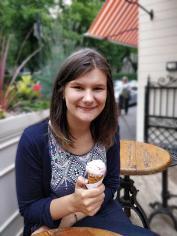 ‌‌‌‌‌‌‌‌This week, Elle Lindsay caught up with Raminta Kazlauskaite. Following successful completion of a BSc in Cell Biology at the University of Edinburgh, Raminta is now tackling a PhD combining microbiology with bioengineering.

How has your research progressed since we last heard from you?
After much trial-and-error, SalmoSim is finally up and running! The first experiment that I completed with the fully designed system was technical repeats: I used multiple gut samples from the same fish to establish the variability (experimental error) of the analysis technique, thus allowing me to set confidence limits for what is significant data. I cannot yet confidently confirm that the variability in-between different runs can be fully neglected, but early results appear promising.
Currently, I am performing validation experiments that will allow us to see if SalmoSim can be used to truly replicate the salmon gut microbiota. We had an amazing chance to take part in the feed trial performed by Marine Harvest in Norway, in which they tested the effect of alternative feeds on salmon growth and microbiota. A change that we are really interested in is what happens to the salmon gut microbiota once we switch their diet from the traditional fish-meal (used in the fish farms) to a fish-meal zero diet (containing alternative protein sources). If everything goes as planned, we are hoping to see that the microbial changes that occur in the gut of live salmon can be replicated inside the SalmoSim system. This will confirm that SalmoSim can successfully replicate salmon gut microbiota and can therefore finally be used to answer some important questions relating to the salmon gut microbiome.

Are you where you thought you would be a year ago?
Not really. Last year I was hoping that at this time I would be finishing with the validation experiments, but now it seems I will be finished with them just before Christmas. This small delay occurred because I decided to perform technical repeat experiments prior to validation, in order to be sure that my system is definitely running correctly, and variability does not influence the outcome. I am really happy with my decision, even if it means I have delayed my plan by two months.

Which part of your research have you enjoyed the most/felt most proud of?
Of course building the SalmoSim on my own. Last year the system was just three loose reactors and a lot of scary tubes, but now it is a nice working system that I can easily control. Apart from the SalmoSim system itself, I had the amazing opportunity to present my initial plans and results in two fantastic conferences: FSBI (The Fisheries Society of the British Isles) and ISME17 (International Society for Microbial Ecology).

Have you come up against any unforeseen challenges?
I think the biggest challenge I have faced so far is losing our amazing post-doc, Alessandro, to a great job opportunity. At the start of my first year, I thought that throughout the initial stages of my PhD I would have a person who would help me to set up the system. Unfortunately, I was left alone to tweak the design of SalmoSim and find solutions to any problems that occurred (regardless of whether its 2pm or 2am, because with SalmoSim, any tube that can get blocked WILL get blocked). Thankfully, I have two amazing supervisors, Martin Llewellyn and Stephanie Connelly, and fantastic lab-mates who have helped me a lot during this part of my PhD.

What are the most important lessons you have learnt from your first year?
The most important lesson I learnt from my first year is that I should not be worried about making my own decisions. Before starting my PhD and especially throughout the first months of it, I was not confident working independently and making important decisions, particularly when it involved buying expensive reagents or changing the SalmoSim design. However, as time went on, I became more and more confident with the decisions I made; I hope this will help me a lot over the next three years of my PhD.

If you could tell your first-year-self 1 thing, what would it be?
Don’t even think about giving up, as it will get easier. (Also, when its 1am and you’re about to go home for the night, triple-check that the reactor propellers are turned on...).