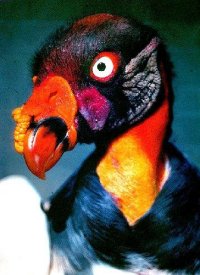 Among higher vertebrates there is no mammal species which exists exclusively by scavenging; but this life style has evolved in a number of bird species, particularly the Old World and New World Vultures. I am interested in the evolution of scavenging in higher vertebrates. Old World and New World Vultures are derived from different ancestry, and are classic examples of convergent evolution. Field work in Africa, India and South America has been aimed at investigating the role of these scavenging birds in natural wildlife systems. Contrary to their popular image, vultures do not obtain their food mainly by scavenging from predator kills. Most scavenging birds are adapted for locating the carcasses of animals which die from natural causes other than predation - such as disease, accidents, malnutrition or old age. Birds, because they can travel using soaring flight with low energy costs, are far much more efficient at exploiting this food resource than any mammalian carnivore.

Many populations of scavenging birds are now becoming highly endangered in the wild. I am particularly interested in the conservation of this group of birds. This involves attempts to understand why vulture populations decline, and what forms of active management such as captive breeding and support for wild populations can be used to protect vulnerable species.