The aim of this project has been to coordinate an international research network examining national mythologies contained within popular TV series in the Czech Republic, Poland and Hungary. After an initial meeting in May 2011 in Poland, a series of three two-day workshops has taken place in Prague, Bydgoszcz and Glasgow involving lead researchers from the Czech Republic, Poland, Hungary, Romania and the UK. 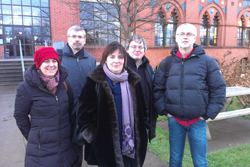 The meetings have also provided the background information for the preparation of a budget and structuring of an application for a major ESRC/AHRC grant.

The participants of this research project have produced an international monograph entitled 'How JR won the Cold War? Cultural mythology, ideology and everyday life in Central and East European TV series' which will be published by Sussex Academic Press, Brighton and Toronto, in 2013.

The Project Leader is Dr. Jan Culik, University of Glasgow.

British Academy for the Humanities and Social Sciences