I am a computational physicist interested in modelling biological systems and performing interdisciplinary research. After a Masters Thesis on stochastic processeses and neural networks, I decided to move towards (molecular) biology, doing a PhD on the effects of fluctuations over the performances of key genetic networks in the bacterium E.Coli. To tackle this problem, I have developed original computational methods aimed to sample rare events in nonequilibrium systems and to efficiently and exactly propagate reaction-diffusion systems in time and space.

My main results highlight that the fluctuations in the binding between regulating proteins and their DNA binding sites is likely to increase the noise in protein production, giving rise to typical bursty productions. However, the long life of proteins is likely to filter out the high frequency components of this noise.

Further, I investigated the reasons of the extreme stability of the bacteriophage lambda genetic switch, using some preliminary work conducted on a model genetic switch. I discovered that the biochemical fluctuations in the system, together with the presence of DNA loop, confer stability and robustness to the network's stable states. I was also involved in assessing the effects of macromolecular crowding on simple bacterial genetic networks. 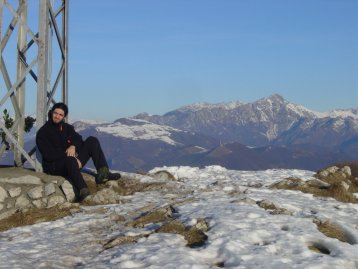 I am currently modelling the micro-evolution of single-stranded RNA viruses. In particular, I am working on Foot and Mouth Disease Virus (FMDV) with the Institute of Animal Health (IAH) in Pirbright (UK), and on Plum Pox Virus with the Institute National de la Recherche Agronomique (INRA), in Montpellier and Avignon (France).

My objective is to develop and link a series of models aimed to describe the behaviour of viruses at a single scale, from replication processes within a cell to large-scale propagation. With stochastic simulations, I am evaluating the evolutionary implications of different viral replication strategies in cells, and the impact of alternative selection scenarios.

Recently, I got involved in the world of next-generation sequencing, where I am developing novel methods to account for machine noise in Illumina reads, quantify the diversity of viral populations, and extract cellular parameters from host-level data.

Finally, I am interested in integrating spatio-temporal (epidemiological) and genetic data to develop a flexible methodological framework, aimed to identify the transmission events occurred during an outbreak, as well as to investigate more theoretical questions in population genetics. FMDV is a particularly well-suited problem for this aim, thanks to the large body of data collected during the 2001 outbreak.