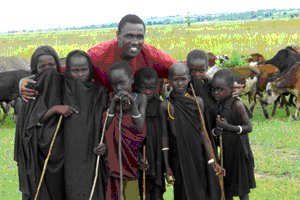 Issa Lyimo is a first year Ph.D. student from Tanzania who is currently working in FBLS.  He joined the Division of Infection and Immunity last April to begin studies on the ecology and behaviour of malaria-transmitting mosquitoes under the supervision of Dr. Heather Ferguson.

Prior to beginning his studies in Glasgow, Mr. Lyimo spent several years conducting field research on malaria vector biology and control in Tanzania.   Like many other young talented researchers from sub-Saharan Africa, he had a strong desire to build his career in research but encountered difficulties in finding Ph.D. studentship opportunities for which students from Africa were eligible.  As Tanzania bears one of the highest malaria burdens in the world, there is a pressing need to build health research capacity within the country.  However as Tanzania is one of Africa’s poorer nations, no government funds are available to help subsidize postgraduate training.  Earlier this year he was awarded a studentship through the Faculty for Biological and Life Sciences (FBLS) which has allowed him to pursue his research aspirations.

Mr Lyimo is currently a staff member in the Public Health Entomology Unit at the Ifakara Health Research and Development Centre in Tanzania (IHRDC), and will continue to collaborate and conduct research within this institute as part of his Ph.D. During his studies he will split his time between field research in Tanzania with laboratory research and training in quantitative biology here in Glasgow.   His research explores the potential use of cattle and other livestock to divert malaria-transmitting mosquitoes away from people and thus reduce transmission.  In the first six months of his research, he has conducted field studies on mosquito fitness in pastoralist communities within the Kilombero Valley, and behavioural assays within the novel semi-field system at the IHRDC.  The work has progressed so well that he was able to present his preliminary results at the Gordon Conference on Malaria in Oxford this year, and recently obtained a Global Health Travel award from the Bill and Melinda Gates Foundation to attend the Keystone Symposia in 2008.

Mr Lyimo's appointment cements a formal training partnership between the University of Glasgow and the IHRDC in Tanzania: contributing to capacity building within the public health sector which is a key aim of both Dr. Ferguson's research and the Glasgow Centre for International Development. We hope to see more such formal training partnerships between the University of Glasgow and African research institutes in the future, and are working together with other GCID members in FBLS to create further opportunities to do so.  We are delighted to have students such as Mr. Lyimo working as part of our interdisciplinary and international research team at GCID, and very much look forward to seeing his research career in health progresses on return to Tanzania.